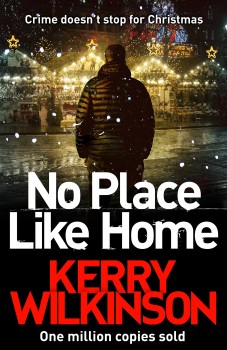 Craig Macklin’s parents owe money and the interest is mounting at a rate they can’t keep pace with, but when Craig tries to help out, he finds that paying the money back isn’t easy.

Kerry Wilkinson takes a break from his usual series character, Manchester DI Jessica Daniels for a standalone set on her patch.

No Place Like Home is firmly rooted in the darker side of the North West, the side that Craig Macklin thought he’d managed to put behind him when he left behind his school friends and his family to work down in London. Thirteen years later, Craig has been made redundant from his job as a logistical manager for a transport firm and has separated from his wife.

He returns home to his parents’ house for Christmas. But although Manchester is wreathed in lights and decorations, the darkness is still all too close to the surface. His parents borrowed money from a well-known and trusted local moneylender, but now someone else owns their debt and interest is mounting at an alarming rate and they have little or no prospect of paying the money back.

Craig reluctantly takes matters into his own hands and tries to repay the money himself, but it’s soon obvious that money isn’t what is wanted. Chinese gang boss Haken now has his hooks in and he’s not going to let go that easily.

Wilkinson juggles two storylines throughout the book, one following Craig in the present, telling the story of what is now just an ordinary bloke caught up in events he can’t control and pitted against men who have no qualms whatsoever about leaving dismembered bodies for the police to find as a warning to others. The other strand of the story follows the teenage exploits of Craig, his best friend Mark Griffin, and Kimberly, the girl who chose Mark over Craig, a choice she later comes to regret.

No Place Like Home is another of Wilkinson’s very serviceable thrillers. I was quickly caught up in Craig’s story, but did start to find that the lengthy returns to his teenage years slowed the pace down more than the insights I gained from them warranted, which left the main story feeling stretched a trifle thin at times. Despite that, I was glad I stuck with the story. The explosive final reveals did come as a shock and made up for some of the slower parts. This is not the Manchester that the tourist board would want to advertise, but it does exist, and Wilkinson does a good job of bringing it to life.