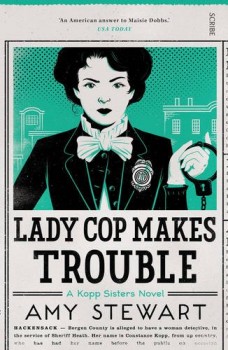 Constance Kopp, America’s first female deputy sheriff, discovers her position may be in jeopardy because of the law. When a German conman escapes her custody, she must find him to save the job she loves.

In the sequel to Girl Waits With Gun, the Kopp sisters are back and their return is just as compelling as their debut almost two years ago. Based on the real-life sisters from Bergen County, New Jersey – and the career of Constance, one of America’s first female deputy sheriffs – this adventure finds her position at stake after she is tricked by a con man.

The many and varied crimes Amy Stewart weaves into her tale are one thing. Equally compelling are the beautifully rendered characters, including a superb cameo of the great American poet, William Carlos Williams, a noted paediatrist by day, who wrote his poetry, short stories, plays, novels and essays at night.

Set in 1915, before America’s entry into the war, this is a colourful and inventive story – with  a serious message at its heart about the importance of meaningful work to women’s identities and, in some cases, survival. Pistol-packing Constance was a real one-off and totally suited to becoming a pioneer. An impressive six feet and proportionally built, her commanding presence and obvious intelligence gave her huge advantages – but also provided her enemies with plenty of ammunition. Capable of physically tackling a man on Brooklyn’s streets, she is rather less at home pouring punch in a theatre lobby at sister Fleurette’s Christmas pageant – a duty her mainly male opponents would say more fitting to her sex.

Stewart combines the rough-and-tumble atmosphere of early 20th-century New York with the story of three women determined to live on their own terms. A mainly plot-focussed story and the addition of supporting female characters also pushing societal boundaries means there is less time for likeable sisters Norma and Fleurette, but doubtless they will feature in future adventures.

This is one of the best mystery novels of the year with entertaining characters based on meticulous research, understated humour, and an accurate snapshot of the times. The actual plot is surprisingly simple. Political opponents of Constance’s appointment are using the law to put her position in jeopardy. When a German conman escapes her custody, she must find him find him to save herself and avoid the risk of the honourable and liberal sheriff who employed her being thrown in his own jail.

It’s a clever, suspenseful, and often wryly witty tale of a formidable and frequently forceful woman facing crime, politics and social stigma against a background taken straight from the headlines of the New York and New Jersey papers of the time. Stewart adeptly introduces details of early 20th-century life and concerns such as jail reform and women’s rights, but this is no political tract and they are never allowed to dominate the story.

But she does leave the reader wondering about one unsolved mystery; her developing relationship with her surprisingly thoughtful, liberal – and married – boss, Sheriff Heath. And fellows. This isn’t just a book for women. It’s a great and funny read and Constance Kopp and her adventures should definitely be on your to-read list.