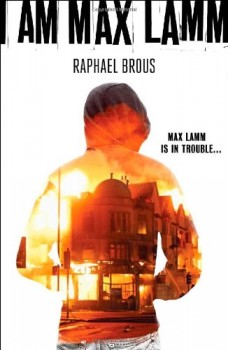 I Am Max Lamm

Max Lamm is a young New York Jewish tennis player with great promise, but the release of footage of him with a Salvadorean prostitute makes him the villain of the month, and he is hounded by the press. Lying low in London, he strikes out at Malik, a young Pakistani boy who he believes is trying to mug him, unfortunately kills him, and again goes on the run.

The death triggers anti-racist riots in London. Max fears he has been identified and reluctant to return to his flat, hides in a pit under a barbecue in Hyde Park. He comes into contact with Kelly Wesson, an attractive but disturbed young woman, and makes a clumsy attempt to extort the funds for a forged passport from her father, a powerful right-wing US senator.

The interest in I Am Max Lamm lies not in the crime or the victim, about which we hear very little, but the nature of the society which confronts Max as bad luck casts him into the abyss. Max’s fall from grace is reminiscent of Tom Wolfe’s The Bonfire of the Vanities, as the media and various sections of the public outdo themselves in pious castigation of someone young/gifted/Jewish. Raphael Brous evinces a similar cynicism in the way that the death of Malik immediately provokes a riot, built upon the assumption that the assault was racially motivated, and draws in those seeking to challenge ‘Blairite’ aggression towards Muslims in the Middle East, and skinheads with an exactly contrary perspective.

Max’s encounter with Kelly gives the opportunity to be equally damming to another group that comes in for Brous’ ire: the wealthy and powerful right-wing which dominate Washington politics, and distort the use of American power for their own benefit, resulting in conflict and misery worldwide. Wesson is corrupt in practically every way one could imagine, while supremely hypocritical in public life. Kelly is inevitably tainted by association with her warped father, and clearly destined to become similarly distasteful. She spends time at the National Guard mixing with the poor deluded saps who get paid a pittance for risking their lives overseas for the benefit of her father and his pals, and finds that she enjoys making their lives miserable.

Very few aspects of life coming under Max’s gaze are found worthy of approval: just an English teacher in Australia who reaches his students, and a Jewish congregation which accepts outsiders with an open hand. Even in observing the latter, Lamm can’t help mocking the young professionals whose focus is their cool jobs and acquisitions rather than anything more meaningful. In short, this is a Swiftian picture of society, an impressive debut novel but with an insistence on the dark side palatable to only the most jaundiced.