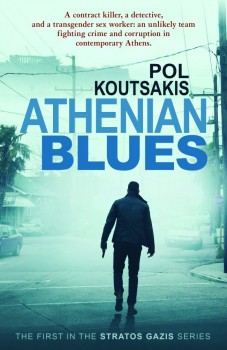 Contract killer Stratos Gazis is contacted by the beautiful actress Aliki: her husband beats her, and she wants him dead. Stratos decides to do a little investigating before he accepts the job.

Modern-day Athenian Stratos Gazis is a hit-man for hire, or caretaker as he prefers to be called, but before he takes a contract he likes to know all the relevant facts. So when he receives a request from Aliki, one half of Greece’s most glamorous couple, to kill her husband, he does some checking. For one thing, Vassilis the spouse is a top lawyer, often in the news for his high-profile cases.

Unfortunately, the case quickly becomes more complicated. Immediately after Stratos’ meeting with Aliki, a woman friend and physical match through repeated facial surgery is gunned down in Aliki’s car, possibly evidence that Vassilis is seeking to kill his wife, as she alleges. Vassilis, when interviewed, says that Aliki has been under the care of psychiatrists and repeatedly hospitalised for self-harming.

Stratos has two friends to help him make sense of what is going on, both companions since their school days: Teri, a transgender sex worker, and Drag, a police detective. While at first sight inevitably bound for professional conflict, their long-standing friendship enables them to find ways to be mutually supportive. Another person in their lives is Maria, Stratos’ landlord and lover, with whom Drag is also in love.

Over the next few days Stratos criss-crosses Athens interviewing anyone who can help him determine the truth behind all the assertions he has been given. Amongst these are Angelino, who lives as a down-and-out in Omonia Square but has his finger on the pulse and knows stuff that the indolent police do not. Stratos gets the answers he needs very late, in a dramatic finale.

This is the first in a series starring Stratos, and presumably his friends and his way of working will follow the pattern established here. For a killer the protagonist has a surprisingly moral way of looking at things, which makes him more sympathetic than might be considered realistic. He occasionally comes out with quotes from obscure Hollywood films, from some despised anti-hero, which gives a clue as to his thinking.

He is also prone to acerbic comments about the life he sees around him: the poor motivation of the police, the ‘old custom of non cooperation between the municipal and state services’, the effect of the financial crisis and the unenviable lot of Bulgarian, and now North African, immigrants, all come in for cynical asides. A certain amount about local place names, and food, all add to the local colour.

The book was originally written in Greek but translated by the author, very competently. There is plenty of action and all the characters have a sense of drama about them. My only reservation is that they are a bit too exciting, like Stratos himself and his occupation, something which probably calls for a very low profile if you hope to stay active for very long.