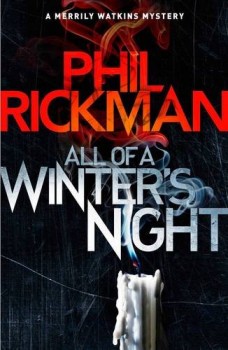 All of a Winter's Night

Exorcist Merrily Watkins knows that Aidan Lloyd’s funeral was too perfunctory and too impersonal. But what she doesn’t know is how to put things right to enable the dead man to sleep easily in his grave.

Some funerals are harder than others, as Merrily Watkins knows only too well. It’s particularly hard when the family of the deceased provide very little personal information and the local grapevine insists on painting a picture of a man hooked on drugs. Because of this, Aidan Lloyd’s funeral is perfunctory in the extreme, leaving Merrily with the feeling that she has not been able to lay him properly to rest, following his death in a quad bike accident.

It seems Merrily’s not the one who feels that way. When her daughter Jane sees lights in the graveyard at night, they go out to investigate and witness a macabre scene. Never one to leave anything well alone, Jane sets out to investigate the death of the wealthy farmer’s son and gets caught up in an old feud. At the same time, Merrily is in the middle of some nasty political in-fighting in the diocese and her position as diocesan exorcist for Hereford is under threat from a reforming bishop, determined to put an end to what he sees as medieval anachronisms within the church.

All of a Winter’s Night is the 14th book in Phil Rickman’s Merrily Watkins series, and the books show absolutely no sign of going stale. The characters are as fresh as ever, and the plot is probably the most spine-tingling one to date. Some of the scenes, especially those taking place in the graveyard in Merrily’s parish of Ledwardine, are probably amongst the creepiest that Rickman has written.

The Norman church of Kilpeck forms part of the backdrop to this story of sinister goings-on in the Herefordshire border country. Kilpeck is famous for its series of exotically carved stone corbels, depicting, amongst other things, a Disney-style dog and rabbit and a Sheela na Gig, a carved female figure holding open her grotesquely large vulva. Such carvings are usually euphemistically referred to as ‘female exhibitionist’ figures. The church also has a Green Man, as well as the most intricately carved doorway of any church in the country.

When Jane discovers that Aiden Lloyd had connections with the Kilpeck Morris group, or ‘side’ as they are properly known, she’s drawn into a dark world of local tradition and in company with the irrepressible gravedigger, Gomer Parry and Lol, her mother’s boyfriend, Jane ends up doing something that puts her on the wrong side of the law.

The Kilpeck Morris side aren’t the sort you see performing at village fetes in summer. They practise Border Morris, with its controversial tradition of the dancers blacking up their faces, wearing top hats and rag jackets, and wielding sticks that are more like offensive weapons than dance accessories. This is very definitely a case of Dance the Dark Morris, and it was hard to read the book without constant echoes of Steeleye Span’s haunting album Wintersmith running through my head the whole time. Terry Pratchett fans will certainly feel at home in this book.

While all this is going on, DI Frannie Bliss is busy investigating the shooting of a garage owner in Hereford and wondering how long his relationship with ice maiden DCI Annie Howe will last if her father Charlie succeeds in getting the job of Police Commissioner for the area. Charlie was a bent copper when he was on the Job, and Frannie’s certain he’s no less bent now.

As ever with Rickman’s books, all the threads gradually start to come together in a rich and varied pattern, shot through with heavy strands of darkness that make it wise to read in a well-lit room. If you make the mistake of taking this book to bed, like I did, expect to have some very disturbing dreams. Rickman is on top form here, as are all his characters. Morris dancing might not be everyone’s cup of tea, but it’s wholly in keeping with  the liminal landscape of the Herefordshire border country and provides a delightfully sinister theme for the latest book in a series that I pounce on with positively indecent haste whenever one appears.