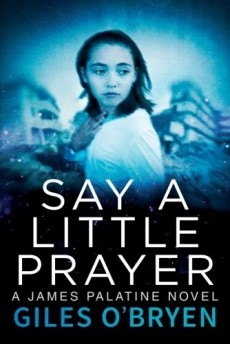 An intelligence officer has to rescue a girl from child traffickers in 1999 Kosovo.

Kosovo, 1999. James Palatine, a UK Army Intelligence Officer, joins a secret mission to locate Serbian anti-aircraft units in advance of what becomes a catastrophic NATO bombing campaign. During the operation he finds an abducted young girl and rather than abandon her he feels compelled to ensure her safety. But he unwittingly leaves her in the hands of child traffickers, and decides to make amends – and with the help of her mother he attempts to rescue the girl.

Say a Little Prayer is the second novel featuring Palatine (book one was Little Sister) but it can be read on its own. Despite being trained and willing to kill, Palatine’s moral compass spins to guide him to assuage the feeling of guilt about his role in the girl’s demise and its affect on her mother. He is at times both supported and understandably disparaged by strong female characters just as determined and capable when it comes to participating in the nightmare rescue plan.

The year in which the story is set plays an important part in the narrative as the region was on the brink of another war when thousands of children fell victim to traffickers and communities were forced to define themselves with ethnic and religious groupings.

The novel is dark and intelligent, creating a real sense of threat and danger in an uninviting version of the Balkans and offering a bleak vision of Eastern Europe at war with itself and Kosovo struggling for independence. This is a place where at times it seems that only criminal activity enables survival in this underworld and violence in the cause of honour is the norm. Indeed, the book demonstrates how violence, during and after the act, affects both those who inflict it and their victims.

Throughout Say a Little Prayer, you can never be sure of the outcome and there are always uneasy doubts that it can all end happily. There are moments of touching friendships and acts of kindness and generosity, but unnerving fear of aggression in various forms underlines everyday life and violence leads to further violence.