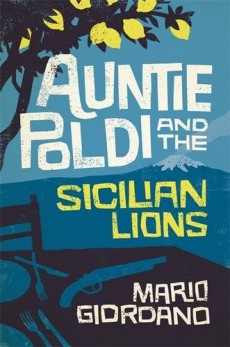 Auntie Poldi and the Sicilian Lions

Auntie Poldi decides to move to Sicily. When she discovers the body of her handyman on the beach, shot through the head, she decides to investigate.

Auntie Poldi decides on her 60th birthday to move from Germany to Sicily to a village near to the sea and close to three other members of her family. Her nephew, who narrates the tale, is trying to write a big epic family saga and is persuaded to visit regularly from Germany to work on it in her attic room.

One day her handyman, Valentino, disappears and Auntie Poldi sets out to investigate what happened to him. When she goes down to the sea one day she comes across his body and sees that he has been shot in the face. Thus she met Inspector Montana who she decides to get to know better. They have some interesting encounters as their investigations develop.

The character of Auntie Poldi is developed in depth throughout the novel. Her nephew describes how she looks and also gives an indication of her fondness for alcohol and her habit of collecting photos of policemen in uniform. It is interesting to follow all Poldi’s inner thoughts, and the strategies she uses to encourage a relationship to begin between her and Montana. Indeed her thoughts make just the funniest lines, especially when paired with the words she actually says – they cannot fail to raise a laugh from the reader. All the action builds up a detailed picture of this woman as unique, extroverted yet sensitive and usually wise.

The other characters are less well developed. In the first part of the book they only appear briefly and the story struggles to hang together. However, when Poldi finds the body the book takes off with a much greater sense of direction.

There are plenty of descriptions of the locations involved in the story providing a real flavour of village living in Sicily. In particular the careful, detailed description of the house of Poldi’s friend Valerie captures the faded glory of an old Italian house with its fantastic painted ceilings, and its tiled and mosaic floors peeping out from under faded carpets – wonderfully evocative of so many grand houses that still exist throughout Italy.  Likewise there is interesting historic detail about the sulphur mines on Sicily which helps to conjure up the rather frightening atmosphere of the bleak landscapes around the abandoned mines on the island.

The story is a joyful light read and includes a number of wonderfully whimsical flights of fancy such as the description of Inspector Chance, “one of the most successful investigators in the whole history of crime since Oedipus”, and the description of a meeting between Poldi and Montana “when the argosy of their passion finally departed under full sail.”