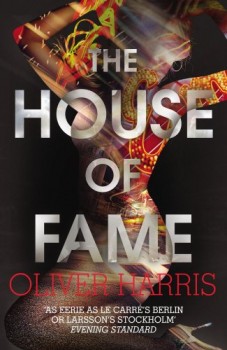 The House of Fame

Nick Belsey is a disgraced policeman, living in a recently closed police station. An insistent knocking at the door introduces him to a woman who is searching for him by name, to help her to find her missing son. Helping her leads Nick into the world of celebrity, obsessive adoration and corruption.

Nick Belsey is living in the newly closed Hampstead Police Station. When he answers a knocking at the door he is surprised to find that he is being sought, by name, by a woman who is seeking her missing 41-year-old son. In the missing man’s room, Nick discovers photos, cuttings and magazines showing an obsession with Amber Knight, a beautiful, 20-year-old celebrity. Amongst these items is a bottle of Amber’s latest perfume, which Nick finds has not yet been released.

Posing as a security guard, Nick visits Amber’s highly secure home, and this results in his accompanying Amber to a party, as her chaperone. Here, he meets a wealthy girl, gets drunk and discovers the next day that the girl has been murdered, and his card has been found with her.

Nick, embarks on an investigation, despite his disgrace, lack of support from the police and hostility from Amber. He uncovers a sordid world of exploitation until, of course, he successfully exposes the truth.

Do not be put off by the cover of this book. The image suggests something rather trashy but in fact, the story inside is gripping and is highly readable. The main protagonist gathers both interest and sympathy. His reckless determination and his resilience despite the odds that are stacked against him, mean that, as reader, it is not easy to be certain of the directions his actions will take and, indeed, what the outcomes of those actions will be. The result of this is that the plot trots along at a fast pace.

The tone of the novel, its intimations of the shallowness of celebrity and the associated exploitation, gives a strongly evocative picture of the overlap of fame, obsession and exploitation.

This is the third of a series of books concerning Nick Belsey and I have already put the first two onto my ‘read next list’.