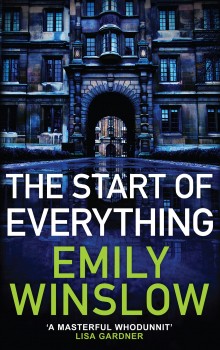 The Start of Everything

A woman’s body is found in a flooded Fenland sluice. The daughter of a Cambridge don attempts to trace a student who seems not to exist. DCI Morris Keene and his partner DI Chloe Frohmann are led to an isolated country mansion where they uncover a web of horror.

Emily Winslow is being tipped by some as the next big thing in British crime writing and judging by this effort I would not care to give odds against that. This brooding, sometimes shocking mystery, uniquely told through the eyes of five different characters, is as refreshing as it is penetrating and clearly marks her as a name to watch.

Winslow, an American living in Cambridge, trained as an actor, took a master’s degree in museum studies, then spent six years creating elaborate logic puzzles for a games magazine – and it all shows. She has an enviable ability to juggle five stories into a cohesive and compelling whole. Her painstaking and perceptive representation of her adopted city with all its history contrasts dramatically with its bleak and forbidding Fenland setting, and she has a pronounced ability to explore the darkest parts of the human mind.

What emerges from this labyrinth of stories and fragments of the lives of her characters is a dark, sometimes baffling tale of incidents, misunderstandings and individual perspectives which culminates in a savage twist. There is no single killer with an obvious motive and no vindicated detective, just a tangle of stories of individuals driven by their own desires.

The characterisation is brilliant. From the autistic daughter of a don who pursues her job of tracing mis-addressed college mail with a single-minded efficiency, through two baffled detectives each affected in differing ways by their shared past and trying to piece together what seems an unsolvable series of puzzles, to the most minor walk-on parts, these are real, if often damaged people.

The story begins, or at least appears to, with the discovery of a young woman’s body in a Fenland sluice. Detectives Chloe Frohmann, recently promoted, but emotionally unstable after finding herself pregnant, and Morris Keene, back at work after a major line of duty injury, have nothing at all to go on and early misconceptions and their own problems put the whole investigation at risk. Some dogged work – complicated by more dead ends and errors – eventually leads them to a converted country mansion and its strange and disparate set of occupants, all with their own problems, but caught in a web of secrets, past, and fresh and horrific crimes.

This is one for those who like suspense and psychological thrillers – and it is as much a test of a reader’s ability to apply logic to deceptive identities and situations as it is for the detectives. You’ll want to believe you know where a particular event may take the story, only to find you are mistaken and have misunderstood the character and their motives. Like a real crime investigation, nothing is as predictable as it appears and it is her ability to weave this web of uncertainty and deceit, punctuated by some quite horrifying crimes, makes Winslow a genuinely exciting addition to the crime scene.