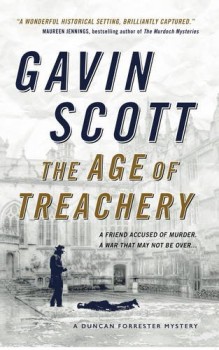 The Age of Treachery

When a close friend is accused of murder, Oxford fellow and wartime SOE agent Duncan Forrester sets out to prove his innocence, following the trail of evidence from the ruins of Berlin to the forests of Norway – and discovers, that for some, the war is not over.

This hugely enjoyable, clever and elegantly written story, isn’t really a book at all – it’s a plot outline for a Hollywood thriller with an all-star cast in cameo roles. That’s hardly surprising as Scott is a British screenwriter based in Santa Monica, writer of the Emmy award-winning The Mists Of Avalon and who has collaborated with both George Lucas and Stephen Spielberg. He certainly knows how to create an appealing hero and a fascinating and totally believable setting for his work.

Duncan Forrester is a Junior Fellow in Ancient History at an Oxford college, still trying to come to terms with his experiences as an agent of the Special Operations Executive, Britain’s eclectic collection of saboteurs, resistance advisers, spies and assassins who operated throughout Hitler’s occupied Europe. There’s more than a touch of Indiana Jones about him – again no surprise as Scott developed and scripted the Young Indiana Jones Chronicles, but Forrester is undeniably British.

Oxford, in the freezing first winter after the end of the war, produces a wonderful background. While ordinary people queue with their ration books for basic foodstuffs, at the college High Tables Masters and Dons debate the merits of Communism, the dwindling stocks of good port and attend recitals of Viking sagas. College politics is of far greater import than world affairs.

The outrageously theatrical Kenneth Tynan and an ebullient Robert Maxwell both get a role and so does Ian Fleming, the old Etonian naval intelligence officer, spy, ‘foreign manager’ of the Sunday Times, friend of Noel Coward, lover of Lady Rothermere – and inventor of James Bond. How’s that for a walk-on hall of fame?

This intelligent, fast-moving whodunit opens doors into Britain’s recent past and captures an unsettled time as the country struggled with the idea that its wartime ally was now the biggest threat to its future. When a close friend and Senior Fellow is accused of murder, Forrester sets out to prove his innocence, following a trail of evidence from the ruins of Berlin to the forests of Norway – and discovers, that for some, the war is not over.

Key to the story is a missing Norse saga – and a fear of the growing power of communism which would lead America to McCarthy and some in Britain to backing Germans with doubtful backgrounds for the highest offices in the emerging post-war state then being assembled by the victors.

Packed with twists and turns, clever and atmospheric, Scott’s tale will delight fans of the genre. This is Fleming without the gore.