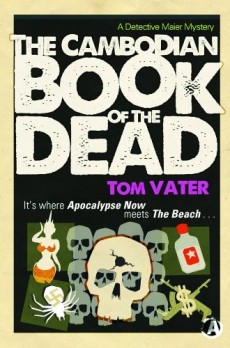 The Cambodian Book of the Dead

Maier is a 40-something detective based in Hamburg, somewhat of a specialist in the Far East after his years there as a journalist in various war zones. The owner of a coffee empire in his home town commissions a detective agency to secure the return of her son, who has a half-share in a dive shop in Kep, a remote Cambodian coastal town, and Maier is the obvious choice for the job.

Almost immediately on arrival, however, he comes into contact with some powerful and ruthless people, and the question soon becomes not so much whether he will be able to extract his client, as much as whether he will escape in one piece himself. The Killing Fields are still too recent for comfort, and the horrors of that time are still very much in evidence.

Tom Vater is apparently well-travelled and his picture of Cambodia is as compelling as it is scary. The country is poor and civic institutions ill-organised and riddled with corruption: life is cheap, and everything is for sale. Even the roads are lethal, driving licences apparently unknown and traffic rules non-existent or ignored. And close to the surface is the consciousness of that period when power fell into the hands of the Khmer Rouge, when a quarter of the population, primarily the best-educated, were eliminated, and life became a living hell for most of the rest. Vater conveys the sense of fragility of life in such circumstances and certainly provides an invigorating backdrop to the tale.

The action itself is fast and furious from start to finish, with enough killings, assassins, tortures and horrors to satisfy the most jaded palate, and Maier is placed in several terminal situations. The main credibility problem with this is that given the clear dangers of his situation, Maier repeatedly puts himself in the firing line and his survival seems to be nothing short of remarkable. Like all good protagonists, Maier is cool and clear-thinking in a crisis, but would seem unwise to rely quite so much on luck, even if he has picked up a fatalistic attitude from his time in the East.

Tom Vater is the author of a previous thriller set in the Far East – The Devil’s Ride to Kathmandu - and is planning another adventure for Maier entitled The Man with the Golden Mind. Exciting fast-moving action set against convincingly depicted exotic backdrops sounds like a recipe for success, and it seems likely the author’s name will soon become a familiar one.