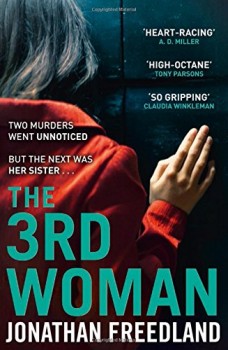 When her younger sister is found dead, apparently from an OD, investigative reporter Madison Webb refuses to accept the official verdict and begins her own inquiries. These lead her into a dangerous web of state and international politics, greed and corruption.

Jonathan Freedland has never been afraid of the big concept. His first five books, published under his pseudonym of Sam Bourne, all mixed ‘real-time’ clever and horribly possible plots with compelling, page-turning stories – and sold more than 1.5 million worldwide. Now The Guardian’s executive editor and columnist has dropped his disguise for an absolute blockbuster of a story which mixes politics at both local and international levels with drugs and murder, investigative journalism, revenge and corruption.

Set in the not too distant future, America, after decades of living far beyond its means and hamstrung by party political infighting, has collapsed under a mountain of debt. China, its biggest creditor, has forced concessions over repayment and Beijing officials, guarded by units of the People’s Liberation Army, are in all the key West Coast ports.

With their hierarchical structure and immunity from prosecution and money, has also come massive corruption of American politics, government, civil life and the police. This is the web of treachery, lies, deceit and danger into which award-winning Los Angeles Times investigative reporter Madison Webb plunges as she attempts to unmask the killer of her younger sister, found dead of an apparent drugs overdose.

The police want to treat the death as just another addict OD, but Maddy is confident her sister had never taken drugs and soon finds a link to two similar deaths, both, like her sister, beautiful young blondes. With the willing, or forced, help of a variety of ‘black’ internet operators, political advisers, would-be state governors, policemen and relatives of the other dead girls, she eventually penetrates a wall of silence and comes up with what looks like a world-shattering solution.

Maddy herself, a driven insomniac, is a complex and flawed central character. She hides her own deadly secret behind a front of ambition, cunning and ruthlessness and her relations with her brain-damaged mother and bossy, conventional older sister, point up her own insecurities.

This really is a compelling thriller and one you will find not only difficult to put down, but one which will leave you wondering how possible the sub-plot of this cleverly written and gripping story might be.

A minor complaint. As a former investigative reporter, I found some of Maddy’s exploits a shade unbelievable. No-one’s that good! But don’t let my jealousy detract you from what is a really great read.