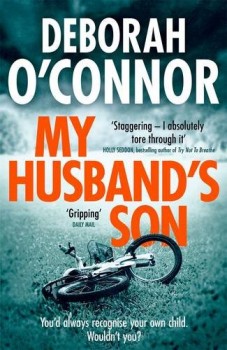 Heidi and Jason met at a conference on child safety and came together because of the tragedies in their lives. Six years ago, Heidi’s daughter was abducted from outside a caravan on a holiday park and subsequently found murdered. A year later, Jason’s young son Barney disappeared from a block of flats and despite a huge hunt has never been found. His marriage to Vicky broke up under the weight of their loss. Heidi and Jason understand what it is to live with a loss of that magnitude every day of their lives, but unlike Heidi, Jason is still able to live in the hope that one day he’ll be reunited with Barney.

When Heidi spots a child in a backstreet off licence one day on her way home from work, it looks like that hope might stand a chance of turning into reality. The child is uncannily like the image the specialist age progression artists have come up with for Barney and Heidi can hardly contain her excitement. But Jason has had his hopes raised and dashed so many times that he doesn’t share Heidi’s passion for this new lead and eventually declares that the boy isn’t Barney. End of story, as far as he’s concerned. But Heidi isn’t so easily persuaded.

What follows had me reading from between my fingers at times as Heidi embarks on a course of action that seems to involve checking her common sense into a left luggage office and leaving it there, as her actions spiral out of control and threaten both her marriage and her job. I seemed to spend much of the book wanting to yell very loudly at Heidi to stop being so bloody stupid. She tries to peer in the windows oat the back of the off licence by climbing on top of a dustbin whilst wearing impossibly high stiletto heels. She repeatedly stands up an important prospective client and then seems surprised when her boss takes a dim view of her losing the work. She lies to her husband and puts herself in a dangerous situation with another man. In other words, she spends most of the book acting like a complete idiot, and it’s very hard to have sympathy for her, even with the slow drip-feed of information about what happened to her daughter.

And there lies, for me, anyway, the essential problem with so many of the psychological thrillers, sometimes labelled domestic noir, that seem to be being produced in ever-increasing numbers. It can be damned hard to sympathise with any of the main characters, as most of them – as here – seem hell-bent on self-destruction. It was hard to get past the feeling of wanting to shake some sense into Heidi.

Of the two, Jason came over as the more sympathetic character, and you’d have to have a harder heart than me not to have felt an emotional tug at the description of Jason and his ex-wife Vicky sharing custody of Barney’s favourite toy. But nothing is ever quite what it seems in this sort of book and My Husband’s Son is no exception to that rule.

Deborah O’Connor’s debut certainly provoked a reaction from me, and despite the obvious – and less obvious – shortcomings of both characters, I was pulled onwards by the need to discover whether Heidi’s obsession with the young boy she thinks is her husband’s lost son is correct. The book takes a hard look at the treatment of grieving parents at the hands of the press and the public and O’Connor doesn’t pull any punches. It’s impossible to read a book on this subject and not to find your mind wandering to cases like Ben Needham and Madeleine McCann. O’Connor will make you question your own prejudices, and it’s in the moral complexities that My Husband’s Son really comes alive. No matter what you feel about the main characters, this is a book you’ll want to see through to the end.