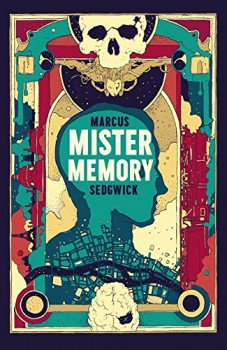 In post-Commune Paris, in the last year of the 19th century, a man with a perfect memory murders his wife. But that is just the start of the story.

In 1899 in a Paris struggling to put the excesses of the Communards behind it, a man shoots dead his unfaithful wife. It’s not even a major crime. Under French law, if the adultery was committed and detected in his own home, a crime passionnel cannot be considered a capital offence. But when cabaret artist Marcel Després is almost immediately transferred to the famous Salpêtrière asylum without trial and on the personal orders of the Prefect of police, the Sureté detective assigned to the case feels justice has been circumvented.

Inspector Laurent Petit, a former soldier struggling to come to terms with the murder of his fiancée, continues to investigate and soon discovers there is far more behind the decision to close the case – something with links to the highest and lowest in France. Després performed as Mister Memory, and Lucien Morel, the elderly doctor assigned to his care, soon realises this is no ordinary patient. Després is a man who cannot forget, a man who can recall every detail of every moment of his entire life. He is also totally incapable of telling a lie.

For entirely different reasons the policeman and the doctor set out to unravel the mystery. Petit thinks he is following normal procedure – until he is warned off the case. Morel, a dry, unempathetic and frustrated clinician, is fascinated by the opportunities it presents in terms of scientific understanding – and his own fame.

But the answers to all their questions lie inside Després’ head. This tale of intrigue, plotting, power, trickery, manipulation and sexual deviancy is an absorbing mystery, full of action and subterfuge.

Marcus Sedgwick is an award-winning author in the YA and children’s market. And this tale of corruption, sexual scandal in high places; a police procedural; political and even espionage thriller; murder mystery and an exploration of the theories of ‘mind medicine’ and memory itself, shows he has carried his skills through into his adult work.

In the main, the story is told from three points of view – Després, Petit and Morel, with a third person narrator filling in the gaps and one or two of the less central characters, such as Cavard, the head of the Sureté, providing vital outlets to carry it forward.

The narrative style and the switching between past and present tense can be a little off-putting, but stick with it. This is a clever, fascinating and quite riveting story which poses as many questions as it answers.