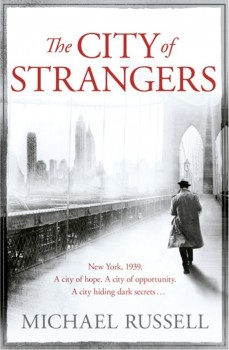 The City of Strangers

This Is Michael Russell’s second book featuring Garda Sergeant Stefan Gillespie, a man whose wife is dead and who has been left with a young son. Those who read the previous one, The City of Shadows, may be surprised and perhaps a little disappointed to find that his love affair with the feisty Hannah Rosen has come to an end, although the subject matter of this book is such that it might have proved difficult to sustain it.

Furthermore, Gillespie is no longer a detective sergeant in Dublin but an ordinary sergeant in West Wicklow – what the English would call ‘a country bobby’. He has chosen this life in order to be close to his family and, in particular, to his son Tom. However, he has to admit - if only to himself -  that he is dissatisfied with a job that mainly involves arresting drunks and sheep stealers, and enforcing the absurd Dance Hall Act, designed to combat the moral dangers involved in dancing. When he is ordered to go to New York to bring back a man suspected of murder, never having been there, he welcomes the chance of a little excitement.

Gillespie’s journey across the Atlantic is made by flying boat and is very much a first-class affair. On the way over he meets Dominic Carroll, one of the characters who is to play an important part in the story, and who, he discovers, is not to be trusted.  However, the task of picking up the wanted man and returning him to Ireland proves - mainly for political reasons - to be more difficult and more prolonged than anticipated and in the meantime he is approached by an Irish intelligence officer who wants his help. It is not long before he finds himself involved in a murder and a kidnapping.

The action takes place a few months before the outbreak of war and there are many different opinions in New York about what action (if any) the United States should take. It is the third biggest Irish city in the world, after Dublin and Belfast, and it is the biggest Jewish city. Naturally, the various Jewish organisations have a strong desire to see America in the war against Nazism.

The IRA, on the other hand, see in Hitler an ally who will help them to bring down the British Empire and smash it once and for all. They have considerable influence in New York, where the NYPD contains a very large Irish element, and the broadcasts of a Roman Catholic priest with a hatred for everything English, have a large following. German immigrants also have a lot to say and have formed the German-American Bund and other violently anti-Semitic organisations. There is a vividly-written account of a group of anti-Semites being lured into a trap by Jews who have lost patience with their persecutors.

Although Russell does not slow down or deviate from the plot in any way, he seems able to provide the ‘feel’ of New York. He gives a very lively description of the St Patrick’s Day Parade and the entertainment following it and makes use of a scene in one of the jazz clubs on 52nd Street, again to set the scene, but manages to advance the plot at the same time. Similarly there is a description of the World Fair and a reminder of the international situation by the fact that Germany is not represented.

Following the approach made to him by the Irish G2 intelligence officer, Gillespie finds himself drawn further and further into a dangerous situation. He meets Dominic Carroll again and discovers that he is a very influential supporter of the IRA. He also comes into contact with Sean Russell, the IRA Chief of Staff, and also with a Jewish gangster, a corrupt NYPD captain and a woman, Kate O’Donnell, who leads him to a much sought-after former IRA courier.

Events move very quickly and Gillespie finds himself having to protect two sisters, one of whom has vital information, as they seek to escape from the United States into Canada. He is in personal danger on more than one occasion and, much to his surprise, finds allies in a Jewish gangster and a German Abwehr agent. With so many different interests at stake, the plot, whilst very well constructed, is by no means simple, and it’s necessary to pay attention to avoid having to backtrack.

Eventually Gillespie is able to conclude the case of the suspected missing murderer which is more or less forgotten in what is essentially a political thriller. The ending also supplies an answer to the rather mysterious prologue - an answer which is not necessarily the one that was anticipated.