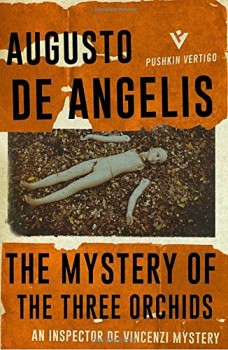 The Mystery of the Three Orchids

As models parade her new creations, fashion house owner Cristiana O’Brian discovers the body of one of her staff on her own bed. Commissario Carlo De Vincenzi  must untangle a web of deceit and blackmail to find the killer.

The second case for Milanese Commissario Carlo De Vincenzi sees the cultured detective face one of his toughest cases in the wealthy and glamourous world of the city’s fashion industry. Newcomer Cristiana O’Brian has quickly established her name and reputation in Italy’s fashion capital in the mid-1930s. But all that comes under threat as, while her models parade her new collection before selected clients, she discovers the body of one of her servants lying on her bed. By his side is a single orchid – a flower which recalls a past Cristiana is working hard to forget.

De Vincenzi, every inch an Italian detective, who combines passion with logic while never losing his own compassion, and his elite flying squad are called to investigate. He faces a baffling case. What is the motive? Why is Cristiana behaving so suspiciously? And what are her estranged ex-husband and his sister doing in Milan? Two further corpses appear, each accompanied by an orchid, and De Vincenzi must puzzle his way through a web of false identities, manipulation, blackmail, deceit and revenge involving American gangsters as well as Milan society.

The story was first published in 1942, shortly before Augusto De Angelis, one of Italy’s greatest crime writers, was jailed for criticising the Mussolini government. Released two years later, he died after being beaten up by a Fascist thug. The novelist and journalist is considered the father of the Italian ‘giallo’ crime stories of the late 1920s and 1930s, so called because of the books’ yellow covers. Together with the Belgian Georges Simenon and his Maigret novels, he launched what would develop into the now so-fashionable noir genre, while English crime writers were still deep in the so-called Golden Age of amateur sleuths.

The De Vincenzi series are all exceptionally well written, revolving around a mystery which seems to fly off  in almost contradictory directions and a dispassionate look at the darker side of life. All are easy to get into, clear and unemotional, but will stay with you after you have turned the last page.

It is the Commissario himself who makes them so appealing. In a time of little or no forensics and hampered by a distinct lack of clues, De Vincenzi must work out the psychology behind the crimes. He does so clinically with mercifully little thought about, or reaction to, the crimes themselves. He is a surprisingly modern detective, focussed solely on motive, which he believes will lead him to the killer. This  is essentially a plot-driven novel – an old-fashioned puzzle with the detective reliant on his wits and his questioning and persuasive powers.

It is masterfully handled with small amounts of information revealed to keep the reader guessing and enough turns and twists to baffle – an intriguing story ideal for readers who like good, old-fashioned mysteries.

Surprisingly De Angelis unusually sprinkles a few clues along the way to help those who fancy themselves as detectives to reach the same conclusion as his protagonist. Nevertheless, this is another fine piece of writing from an author as good as any other European writer in the crime genre in the 1930s.