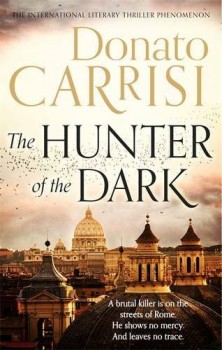 The Hunter of the Dark

Marcus is a man who can see evil, but he has amnesia. In the past he appears to have been an investigator for an ancient holy order. The torso of a young woman is found within the Vatican walls. Before Marcus can investigate properly there are other murders, starting with two young lovers in a car.

When a courting couple are found murdered in a lonely wood, Rome is thrown into turmoil. The most important police inspector is put in charge with all the resources of the Rome police department. Behind all the noise, Marcus, a man who used to work as a penitenziere before being shot in the head, begins his rehabilitation. As a start he is to taken to see the torso of a young nun which has been found in a garden within Vatican City. But very soon he becomes involved in the murder of the courting couple. Things go from bad to worse, a difficult challenge for someone who is trying to cope with amnesia.

It is hard to make sense of the first few chapters of the book until it becomes apparent that there is almost a book within a book, with a ragged start and a ragged end to match. The outside section never really joins with the main story and appears as an odd appendage. However, once the main story begins it is possible to get a sense of direction. The murder of the courting couple is just the start of a series of similar killings.

The pace of the story in parts is fast and furious with a race on to put an end to the murders. However, in several places the pace slows for some reflection on issues about good and evil. This is often delivered in the form of a story or a lesson to get Marcus to think. For example, possible reasons behind the murders are discussed, how the murders of couples might relate to earlier sibling difficulties, how all religions can believe they know the truth, and how good and evil can be related. Psychology is embedded in the story.

The main characters are constructed to be clever and part of an interesting historical tradition. We are told that the Penitenzieri is a group of people linked to the Vatican in order to detect evil. In contrast, the police are made out to be incompetent, the main inspector absolutely over the top in his reaction to a major murder investigation and in his use of resources. The main woman, although a friend of Marcus, could also be seen as rather stupid at times. Her actions in places are just too lacking in awareness for someone who is supposed to be a brilliant forensic analyst.

The book as a whole is quite disturbing with its focus on young people. Also In parts the amount of violence might be questioned although the descriptions of violent incidents do all make sense in the context of the story. Overall it is a clever but quite dark book which maintains the attention of the reader once the structure is understood.