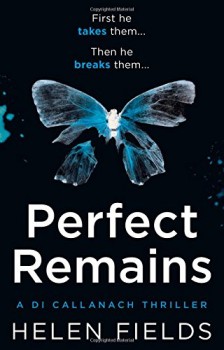 Hikers find the remains of a body in a deserted Scottish bothy. There are clues to the identity of the victim but in reality she is screaming in fear in a locked Edinburgh basement.

Dr Reginald King is an unprepossessing middle-aged man, balding, running to fat and with an unattractive air. Convinced of his self importance and obsessed with the need to be recognised by powerful, good-looking women, King devises a plan to abduct and engage with the objects of his fantasy. His meticulous, detailed plans require the police to believe that his victims have been murdered, allowing him to enjoy them at his leisure.

DI Luc Callanach, half-French, half-Scots, has left his job with Interpol in Lyon, to join the Police Major Investigations Team in Scotland. His exceptional good looks and his French accent do not endear him to all of the team, and this, coupled with the effects of a traumatic incident in France, leave him unwilling to trust and relate to others. When he takes on the investigation into Elaine Buxton’s suspected murder he encounters criticism and blockages which make him question his choice to move to Scotland.

Meanwhile, in a hidden basement room, the number of terrified women, mentally and physically tortured, slowly increases. Powerless to defend themselves against the cruelty of their tormentor and forced to watch the murder of their surrogate bodies, they live in fear, each of them reacting in their own way to cope with their hopeless situation.

The very concept of this novel is horrific – an ordinary, dull man, living out his fantasises and obsessions, taking successful women and faking their death to prevent their being searched for. The descriptions of the cruelty in the basement room and the impact of the realisation of the hopelessness of their situation by the victims is described graphically and clearly. It is all too easy to empathise with them.

Helen Field skilfully gives you insight into the thoughts of all of the protagonists, describing their characters and personalities clearly and sensitively. The main plot runs at a steady pace and is enhanced by another unpleasant sub-plot and back-histories giving further meat to the understanding of the characters.

I got to a point in the book where I had 100 pages to go and knew that it was hopeless to try to do anything other than read to the end. I did, and a very satisfying end it was. I look forward to Helen Field’s next novel.