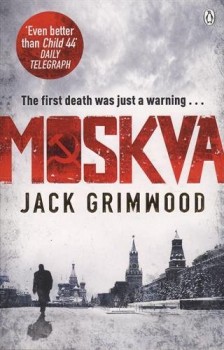 In December 1985, with the USSR crumbling, ex-paratrooper Tom Fox has been in Moscow less than a week when the ambassador’s daughter Alex goes missing. Tom makes it his job to get her home safe.

Hidden away in Moscow after an operation in Northern Ireland, Tom Fox makes only a brief acquaintance with Alex, the daughter of Masterton, the ambassador, before she absconds. Masterton puts this down to adolescent petulance, and is unwilling to seek assistance from the Russian authorities, but expects Fox to track her down.

Fox is predisposed to help out: it is clear that Alex’s flight has something to do with unhappiness over her parents’ strained marriage, a situation which parallels his own unresolved issues with his wife Caro, which he suspects were behind the death of his own daughter in a car crash. Guilt about this is one reason why he drinks so heavily.

His drinking does however help in one respect; his search for late-night oblivion brings him into contact with Dennisov, a helicopter pilot who lost a leg in Afghanistan, now running a bar. The two form an immediate friendship, providing a way for Fox to get information that would not be available through any sort of formal request.

And such a source of knowledge proves to be crucial, as Alex’s disappearance has become entangled in something going back 40 years, to the fall of Berlin. The details remain obscure until the final pages, but the re-appearance of some particularly nasty murders mean that the clock is ticking on Fox’s efforts to recover Alex unscathed, and make amends for past failures.

This is a fairly lengthy book but the action is sustained throughout, and revelations paced well to maintain interest. The most difficult thing to accept is the readiness of Russians, famously suspicious of foreigners at any time, to regard Fox in anything other than a hostile light. Against that is his good Russian, his ability to sink vodka with the best of them, and an apparent roughness and indifference to discomfort which also characterises the locals.

Perhaps also relevant is the year in which the book is set: Glasnost is breaking down long-established power relationships, bringing friction between those hungry for influence and those unwilling to lose what they have. The principals in this particular dispute include military and political figures of influence, and a top mafia boss. All of the men involved now have children, and in some cases also grandchildren, with ambivalent views regarding the authority exercised by their forebears.

This all makes for a complex pattern of relationships which underpins the twists and turns of the plot. Tom Fox makes a worthy hero, if only for his ability in a temperature well below freezing to make lengthy journeys on a motorbike in thin jeans without suffering hypothermia. All that vodka in his bloodstream probably helps.