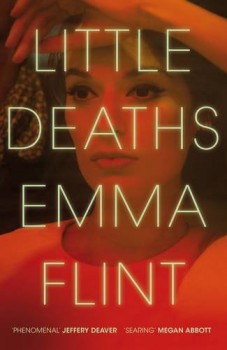 Ruth Malone wakes one morning to find a window wide open and her two young children missing. It’s every mother’s nightmare – but Malone is not like other mothers.

Emma Flint began her involvement with crime writing at the age of twelve with a Poirot novel and Home Office pathologist Professor Keith Simpson’s autobiography Forty Years Of Murder! A Faber & Faber Writing A Novel student, it hasn’t taken her that long to make a stunning debut, a psychologically resonant story which proves beyond doubt that a lush literary style can be combined with period and police procedure to produce a wrenching and often deeply moving story.

This troubling and transfixing book about love, morality and obsession explores the capacity for good and evil and reads like the script for a dark, moody, French film noir of the period in which it is set.

As the New York district of Queens swelters in a heatwave, Ruth Malone wakes to find a bedroom window open and her two young children missing. It’s every mother’s nightmare – but Malone is not like other mothers. A search by police and volunteers discovers the body of her daughter. Later, the decomposing body of her elder brother is found. Both have been strangled.

Malone’s lack of visible emotion, her perfectly made-up face and provocative clothing, a bin full of empty liquor bottles and the love letters that she keeps under her bed from several men lead detectives to suspect her involvement. Fuelled by neighbourhood gossip and speculation, the senior investigator, on the verge of retirement, reaches a convenient conclusion – and is willing to go to any lengths to make it come true.

Tabloid reporter Pete Wonicke, a midwest small town boy on his first major assignment and desperate to make an impression in the big city, at first can’t help but do the same. But the more he learns about the workings of the police and their often incestuous relationship with the press leads him to doubt everything he thought he knew.

Malone is enthralling, challenging and secretive. But is she capable of murder? Wonicke becomes obsessed with both knowing the truth, breaking the story – and eventually with the woman herself. A cross between a stalker and a knight in shining armour, he convinces himself he can both save – and possess her.

This haunting and suspenseful story is told from both his and Malone’s points of view. Malone herself is a remarkable self-contained woman and it is in part this detachment which makes her so attractive to men – and such an enthralling character.

One very slight criticism. It doesn’t take a great detective to work out the identity of the killer. A simple process of elimination will do it. But that should not detract from what is a genuinely brilliant debut. The story is partly based on truth and its setting, which so accurately reflects attitudes of the times, makes it a compelling, if troubling, read.