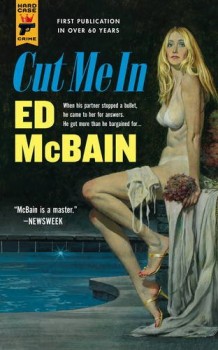 No-one liked tough literary agent Del Gilbert – not those he did business with, the women he cheated on, not even his partner in the agency. But when he is found shot in his office, Josh Blake must find the killer – and a missing contract potentially worth millions.

Sixty-odd years on, this brilliant piece of hard-boiled pulp fiction is as bright as the day it was published under the name of Richard Marsten – one of the many Ed McBain used before his 87th Street Precinct series made him famous. But the sheer descriptive power of his writing as well as a familiar plot and cast of characters presages what was to come.

If your partner is murdered, you owe him enough, even if you don’t like him, to find the killer. You harbour dark desires about his cheated on wife. You’ll be questioned by a hard-boiled and logical detective.

No one liked tough literary agent Del Gilbert – not those he did business with, the women he cheated on, not even his partner in the agency. But when he is found shot in his office, Josh Blake must find the killer – and a missing contract potentially worth millions.

The story’s simple. As a mystery it is not all that difficult to solve, but it follows McBain’s primary rule: “Start with a dead body or someone about to be a dead body.” What makes it so outstanding is its pace, dialogue and the way McBain writes which makes you see, hear and feel the action.

Even before you get to the first body there is probably the best portrayal of a serious hangover I’ve read, complicated by a girl of whom Josh has no recollection, “sitting at the kitchen table in a bra and half-slip with the steam rising from the coffee cup, her legs crossed, the ankle straps, the nylon stockings stretched taut against the curve of her leg, the pale orange lipstick that accentuated her blondness and added just a touch of color to her full lips.” These brilliant pen portraits repeat themselves throughout the novel. Even the oppressive heat of a New York city summer acquires a dark character. “The city needed a lot of rain to wash the heat out of the pavements. And the blood.”

There are plenty of twists and turns in what is really an examination of motivations for murder. Josh favours a carefully-planned plot. The more practical detective Di Luca believes people kill for far more basic reasons greed, lust, rage or revenge.

The setting in a literary agency, where McBain, real name Salvatore Lombino, worked while perfecting his craft writing dozens of stories for the pulp magazines in his free time, is a nice twist. Gilbert and Blake have acquired film and TV rights for the most successful western author of the time, potentially worth millions of dollars. Other agencies want them, along with a Hollywood agent and a movie producer, a powerful motive for murder. And the appearance of a desperate writer, trying to get Josh to represent him, may either be crucial or a simply another red herring.

There are two bonuses to this reissue – a longish and relatively straightforward short story featuring Matt Cordell, the alcoholic former detective from The Gutter and the Grave and the original cover art from the great Robert McGinnis. The bikini-clad blonde sitting by a pool, tiny blue veins visible in her ankles, matching her eye makeup, looks ravishing, typical of one of McBain’s femme fatales and uncannily captures the whole tone of the book.

If you’re too young to have come across the man who invented noir and set the template for all modern thriller writers, this is a great introduction. If you’re already a fan, it will remind you just why Ed McBain is still regarded as The Master.