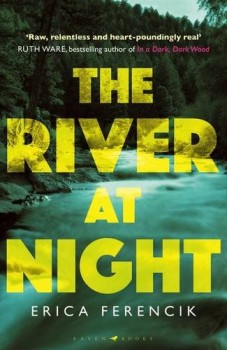 The River at Night

Instead of their usual trip to a beach resort, Win Allen allows her friend Pia to talk her and two other friends into a rafting trip down a river in the depths of the Maine wilderness.

The River at Night is the first title from Bloomsbury’s new crime imprint, Raven Books, headed by Editorial Director Alison Hennessey, formerly of Harvill Secker. Hennessey has chosen to launch with an impressive white-knuckle rafting ride through the Maine wilderness, which takes four city women out of their usual environment and – quite literally – throws them in at the deep end.

Win Allen and her three friends don’t see as much of each other as they would like, but they do try to get away together for a weekend break once a year. This time, Pia, one of the most strong-minded women in this group of late-30-somethings, is trying to persuade her friends to go on a rafting trip down a river that hasn’t yet been fully opened to tourists. Win isn’t convinced, but against her better judgment allows herself to be persuaded to sign up for the trip with Winnegosset River Rafting despite being able to find out very little about them on the internet.

Four women more at home in a wine bar than in the wilderness. A good-looking guide in his early 20s. A dangerous river. What could possibly go wrong?

Things don’t get off to an auspicious start when Win gets separated from the group on the first day’s hike to the river. It’s clear they’ll need to start pulling together as a group if the trip is going to work, but it’s hard to have much faith in Rory Ekhart, their dreadlocked college-boy guide. Rory says he’s done the trip several times, but that’s not much comfort, and it soon becomes clear that no one seems to have pointed out to him that sleeping – or rather, very noisily not sleeping, – with one of his clients on the first night isn’t exactly a good way to bring about group harmony. But Pia is unrepentant, and it’s obvious that the group have a rough time ahead.

The river tests all four women to the limits, and the book explores how fragile their bonds can be at some times and yet how strong at others. Pia is in many ways the leader of the group, but it’s Win’s sense and stamina that help them to survive, as the sign language she learned to be able to talk to her beloved younger brother Marcus, born unable to speak, comes in pretty handy when their attempts to survive take an even more unexpected turn.

It’s hard not to read The River at Night without a loud chorus of duelling banjos as a soundtrack, combined with high-pitched shrieks in the background from Meryl Streep. It’s impossible to escape the inevitable comparisons with Deliverance and The River Wild, but that’s something that every book with this sort of setting will have to live with for a very long time! And that in no way detracts from the impact of Erica Ferencik’s powerful and engrossing debut. The river scenes are superbly described; I could feel the cold water on my skin and the sickening lurch in my stomach as the raft plunges down white-water rapids and bounces over rocks. Trying to extricate yourself from a canoe or a raft that has capsized is no fun – or at least to me it wasn’t! – and Ferencik captures those frantic moments perfectly.

This is undoubtedly an impressive list-opener for Hennessey and Raven Books. Ferencik’s writing is as fluid as the implacable Maine river and her characters – and the wilderness they must struggle against – are impeccably drawn. She has a deft way of invoking sympathy coupled with a ruthlessness that made me almost squawk aloud on a couple of occasion. I don’t think I’ll be going on any wilderness camping trips anytime soon, and I’ll doff my cap to a former work partner of mine who used to go white-water rafting nearly every year. Sooner you than me, mate!