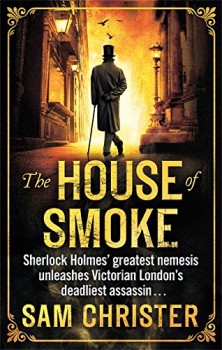 The House of Smoke

Killer Simeon Lynch, incarcerated in London’s foul and filthy Newgate prison, counts the days to his execution – for two crimes he did not commit.

Professional killer Simeon Lynch, chained in London’s foul Newgate Prison awaiting execution, makes his confession and is granted absolution. After the priest leaves, he scratches his own valediction on the cell wall. To the words of Psalm 23: “Yea, through I walk through the shadow of the valley of death, I will fear no evil” he adds: “For I am evil!”

Sam Christer follows up his three earlier contemporary thrillers by holding up a bloodstained mirror to the Sherlock Holmes revival in this chilling and tension-packed story with the underlying message of a medieval morality play. Holmes and his spymaster brother Mycroft both feature, albeit briefly and as merely supporting characters in this brutal tale of the creation and life of England’s deadliest assassin and the organisation which spawned him.

As the bell tolls midnight on New Years’ Eve 1899, Lynch has just 17 days until he will be hanged for murder. Time enough to reflect on, but not regret, a full and complicated life as an assassin in the service of Professor Brogan Moriarty, elder brother of Holmes’ nemesis James Moriarty.

Narrated entirely in the first person, this cool and dispassionate depiction of Victorian criminal life is packed with historical detail. Switching between Lynch’s struggle to survive long enough to be executed in a hellhole filled with brutal warders and dangerous convicts and his graduation through the college of crime run by the Moriarty family, the pace is never allowed to drop.

You can almost feel and smell the cold and the squalor of Newgate, London’s oldest and most vicious prison. In contrast, the privileged, monied life of the master criminal and his servants makes this one of those rare books capable of both thrilling and chilling.

If Christer partly achieves his aim of making the reader sympathetic towards a twice-orphaned workhouse boy, whose need for maternal love leads to a passionate involvement with an older woman, another of Brogan Moriarty’s protégés, it is due to the brilliantly portrayed context of Lynch’s life.

The brothers Moriarty are chillingly painted in this intelligent, exciting and seductive blend of historical truth and fiction, which has all the tensions and menace of a fast-paced crime thriller  It also poses the moral question of how does violence derive and its impact on human development? Can there be a difference between ‘good’ and ‘bad’  violence? Who defines what is right or wrong?

Both Brogan Moriarty and Mycroft Holmes pose this dilemma in their own ways in a tale which delivers an insight onto the darker side of humanity, but this is far beyond being a psychological study.

The question remains, but this is a compelling story, full of surprising twists and with an absolutely superb reveal and climax which will keep you reading to the final page.