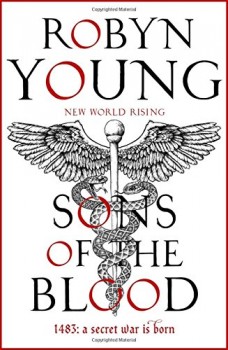 Sons of the Blood

What is the meaning of the mysterious map entrusted to his bastard son Jack Wynter by Yorkist courtier Sir Thomas Vaughan before his execution?

Robyn Young burst onto the historical fiction scene ten years ago with the first part of her brilliant Brethren trilogy. She quickly followed up with the story of Robert Bruce and the struggle for Scottish independence in the three books which made up the Insurrection series.

Now she has jumped 200 years forward to the brutal world of the late 15th century to launch New World Rising which starts ten years after the War of the Roses with an original, and far from impossible, take on Richard III and the Princes in the Tower. Although this first book deals mostly with events in England, the death of Edward IV, the seizure of the throne by Richard, Duke of Gloucester and his eventual defeat and death at the hands of Henry Tudor, it promises far more, with the Renaissance about to come into full flower and the discovery of America only a few years away.

In the sunny Seville Jack Wynter is cursing his fortune. Bastard son and mercenary soldier, he has been sent to Spain by his secretive father, Sir Thomas Vaughan, one of Edward’s key advisers, with a locked chest he has been ordered to guard with his life, a cryptic instruction and a strangely patterned ring.

A bitter Jack believes his mission was simply an excuse for Vaughan to get an illegitimate, inconvenient son out of the country. But when a stranger arrives with news that his father has been arrested and executed for treason, he finds himself thrust into a deadly conspiracy. The answers lie in England, where young Prince Edward is due to become king unless his uncle, Richard of Gloucester, decides to make a move for the throne. England is also where his half-brother, Harry, broods bitterly over what he sees as their father’s apparent favouring of his bastard son.

Jack returns to a land riddled with intrigue, corruption and war. What is the secret he is guarding? It soon becomes clear it can kill him, his family and his friends and that its influence spans Europe and will draw him towards the very edge of the known world.
Young realistically evokes this brutal world, interweaving a gripping tale with her own controversial take on the story of the Princes in the Tower.

Grounded, as all her books have been, in some impressive research, this gripping story is packed full of action, adventure, intrigue, politics and brilliant characters. Her stylish prose gives an alternative insight into one of the most turbulent, exciting, and surprisingly relevant periods of English history.

But it is one about relatively little is known. Winners write history. No one knows what happened to the Princes. Our view of Richard III is largely formed by Shakespeare – who wrote for a Tudor audience and paymasters!

This gripping story, with its sharp plot twists, attempts to bridge that gap and the chasm between the late medieval and early modern worlds. Young gives us the gory sword-and-armour pageantry of medieval war with the addition of gunpowder and cannons. The stranglehold of the Church of Rome on life and thought is offset by the beginnings of a realisation that perhaps there is more intellectually, spiritually – and geographically – over the horizon.

There are any number of books set around this period in English history, but Young’s knowledge and clever interpretation of the political and religious manoeuvring is truly impressive and will appeal to fans of C J Sansom, Rory Clements and SJ Parris.

As usual, there’s a lot of additional material: maps, character list and a comprehensive list of sources, all of which add to a story which will keep you glued to the page and anxious for the next episode.