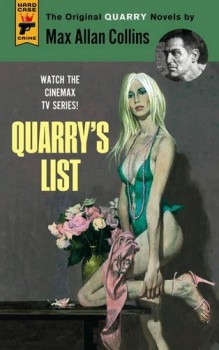 Hitman and ex-Marine Quarry finds himself a target when the would-be successor to the man he worked for – and in whose death he was involved – tries to take over.

It’s hard to believe that the Quarry series is almost pensionable. This one, original title The Broker’s Wife – Collins hated it – first saw the light of a publisher’s day in 1976. This latest edition restores it to its original glory, along with the other Quarry stories. Some of the books, although set in the past, are actually of a more recent genesis.

Their success has reignited interest in the original 1970s run. List, the second in the series does not really flesh out the character, but will explain why Quarry became a killer of killers.

Collins was the first writer to cast a professional killer as his anti-hero. Quarry is not a nice man, just a good killer – trained as a sniper in the Vietnam jungles. He has the skills to keep himself alive, or at least bend the rules enough so he can win. He is also a damning indictment of America’s treatment of its returning veterans from that brutal war. Unwanted, unemployable and often damaged by their experiences, thousands turned to drink, drugs or crime.

It required a brave man to imagine some of the desensitised ‘specialists’ would continue the only work they knew – and that organised crime would find an arm’s length use for them. Enter The Broker, an apparently respectable businessman, who identifies and employs a list of hitmen for hire, plus his commission. The Broker is dead, killed by his own bodyguard while trying to murder Quarry, but the list survives – and it means big money as well as power.

Ex-Marine Quarry is front and centre in the fight for the list. Targeted by organised crime and the man who aims to take over from The Broker, he does what he does best, tracks those after him and despatches them.

One of the fascinations of the stories is their cold-heartedness. Many noir authors try to make excuses for their subjects, make them somehow likable. Collins doesn’t. If one of his opponents killed Quarry, you probably could not tell the difference. It’s just pulling a trigger.

Quarry’s List is short and grim, not unlike its central character. It opens fast, packs a punch and ends, no moralising or sunset finales. Characters, pace, story, setting, action are all classic pulp fiction.

The book is dedicated to the immortal Mickey Spillane, Collins’ long-time friend and collaborator, and there’s plenty of his deadpan ghoulish humour. “Sharing a room with a dead man can be a less than pleasant experience, especially if the man’s bowels empty when he dies, as is common. All of a sudden you begin to understand how the tradition of flowers at funerals got started.”

Quarry’s bid for self-preservation leads him to an old colleague, who is planning a hit on an unidentified target and with expansion plans in conjunction with a mob lawyer. The story is further complicated by his involvement with a beautiful a young woman he meets in his hotel pool.

Being Collins, the sex is spectacular, then he introduces a few more twists and surprises, packing a huge amount of action into a relatively short, ‘one sitting’ story. Golden jubilee or not, this is as fresh as the day it first appeared – a superb and amazingly entertaining example of a genre in which Collins has only one master.