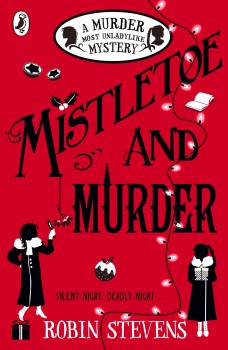 Daisy Wells and Hazel Wong, the President and Vice-President of the Detective Society are in Cambridge for Christmas. Daisy’s elder brother Bertie is a student at Magdalene College, but it’s 1935 and girls aren’t allowed to stay in the men’s colleges so they’re relegated to St Lucy’s with Daisy’s great-aunt Eustacia.

At first, it all seems terribly tame for our two teenage sleuths with a festive round of tearooms, college dining and practical jokes but, as ever, the girls seem to be a magnet for trouble, and the pranks take a nasty turn when one of Bertie’s fellow students plunges to his death down a staircase, giving Daisy and Hazel something more than mince pies to get their teeth into.

There’s plenty of scope for friendly rivalry on this case as the members of the Junior Pinkertons, Alexander Arcady and George Mukherjee, are guests at nearby St John’s College. Hazel, now nearly 15, has rather a crush on Alexander, but he seems to see her as no more than a friend, much to her disappointment, and he seems far more interested in Daisy, but she’s oblivious to his charms and has no intention whatsoever of falling for any romantic notions.

Robin Steven’s Murder Most Unladylike series has always been a joy, and Mistletoe and Murder is no exception. The girls are starting to grow up, and their relationship is changing, with Hazel no longer quite such a slave to Daisy’s whims. But it’s equally clear that Hazel will still follow her friend into danger when push comes to shove. It’s also clear that the girls and the family and friends are by no means untouched and unaltered by the amount of violent death they’ve had to deal with since their first appearance.

Cambridge in 1935, draped in snow, is both beautiful and cold. Women can study there but not graduate. Scholarly women are still regarded as an oddity and not entirely genteel. Their college buildings are utilitarian and don’t in any way compare with the architecture and history of the men’s colleges.

Amanda Price, a first year history student, and clearly the equal of any of the young men, sums up the problem when she tells Daisy and Hazel that to get the same marks, a girl has to work harder and be far better than her male counterparts. There was certainly no such thing as equality for women at university in those days. The casual racism of the time comes over equally strongly, without ever being heavy-handed. Hazel is always conscious of being different, no matter how hard she strives to be British, and she has to fight hard against that sort of inbuilt prejudice when it comes to examining the suspects in their murder case.

This fusion of the boarding school romps of Enid Blyton and Angela Brazil and the crime classics of Agatha Christie is a seasonal treat. Mistletoe and Murder is sharp, witty and beautifully written. Robin Stevens’ characters deepen and grow with every mystery they solve, as does their complex relationship. The book comes complete with a list of characters, maps and diagrams and any aspiring members of the Detective Society can follow the progress of the mystery and draw their own conclusions. But remember, things are never simple when Daisy and Hazel are on the case.