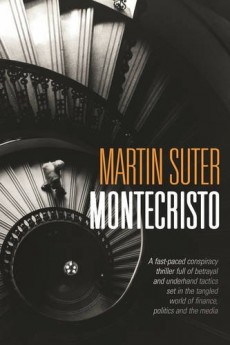 Jonas Brand is travelling from Zurich to Basel when his train is halted by the apparent suicide of a man who has thrown himself from the train.

A freelance video journalist would not have been Jonas Brand’s choice of career and, whilst it provides him with a living, he is not particularly happy with the way his life has turned out. His ambition had been – and some traces of it still remain – to become a film director. To that end he has already written what amounts to an update of The Count of Montecristo, but so far he has not managed to interest anybody in it.

The novel begins with him on a train from Zurich to Basel when there is an apparent suicide, a man throwing himself from the train. Jonas recognises a potential story for ‘Highlife’, a television lifestyle magazine that provides him with much of his work, and takes some video footage of the passengers in the compartment in which the man had been sitting. Any plans he may have had in this direction, however, are soon forgotten when his attention turns to another subject entirely.

There is a weakness in the story at this point because it is difficult for the reader to believe the circumstances leading to his involvement in what becomes a complex tale of political and financial corruption. The events that follow, however, are so gripping that it is possible to forget the rather clumsy coincidence that gave rise to them, as we become engrossed in a tale of financial corruption on a huge scale. It is not a simple story but the technical complexity does not prevent the narrative from being very compelling and full of twists.

We might expect a tale of the outsider against the system, in which Jonas leads a one-man crusade against the all-powerful financial institutions, particularly when he learns that, in their determination to suppress the truth, they have been responsible for murder. However, whilst he is initially prepared to do so, no matter what the personal danger, he is persuaded that it would be beyond the power of a single individual to take on the mighty Swiss banks. When, therefore, he is at last presented with an opportunity to realise his life’s ambition – the filming of the story he has written – he cannot resist, even though it requires him to drop the investigation completely.

Plot appears to be everything in this novel and, apart from Jonas himself and the gruff, cynical Max Gantmann, the characters are not memorable. Max is a famous television expert on economics whom Jonas had met in the course of his work. However, such is the power and pace of the plot that it is able to sustain the reader’s interest even when the characters fail to do so.

Of course, we are aware that Jonas is bound to return to the original financial story and he does. This, however, involves the greatest twist of all, one for which we are quite unprepared. It may not be the ending the reader prefers but, viewed realistically, it may be the only way the story could end.