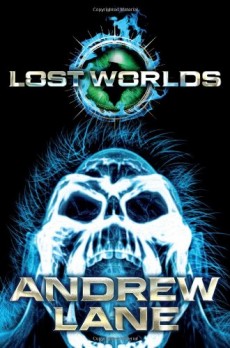 Every now and then someone comes up with an idea that’s so blindingly obvious with hindsight that numerous people wonder why the hell they didn’t do it first. And for many of the adults who, like me, enjoy reading young adult fiction, Andrew Lane has hit the nail on the head, with both his Young Sherlock series and now this, an imaginative and entertaining spin-off from Arthur Conan Doyle’s Professor Challenger stories.

Conan Doyle knew how to tell a rattling good adventure yarn and without a doubt so does Andrew Lane. He writes fluidly, introducing his characters with style and humour, never labouring a scene or wasting words; admirable qualities for any author, but in some ways, even more necessary for someone writing for a younger audience.

Calum Challenger, great-grandson of the famous explorer, George Challenger, lost the use of his legs in the car accident that killed his parents (dealing rapidly and effectively with the age old problem of How To Get Rid Of The Parents). He lives in a converted warehouse, adapted to his needs – Calum hates wheelchairs – and prefers to get around his apartment by swinging on ropes suspended from the ceiling. He is under the loose guardianship of his parents' best friend Professor Gillian Livingstone, and his elderly great aunt. That gives him the freedom he enjoys to pursue his passion for cryptozoology, the search for animals whose existence has not yet been proven by science, following firmly in the footsteps of his irascible ancestor.

The first thing the start of a new series has to do is assemble a team, and this is where Lane’s ability to draw rapid word pictures comes into play. In quick and entertaining succession, along come Brazilian free-runner ‘Gecko’, computer hacker Tara Flynn, and ex-SAS captain and hostage recovery specialist ‘Rhino’ Gillis. They’re all trying to avoid something in their lives: Gecko is on the run, usually over rooftops, from a gang of criminals who want to turn him into a high-end burglar, Tara has hacked one shady corporation too many and is now being blackmailed by them, and Rhino has pissed several people off and really needs to lie low for a while, but at the same time he also needs a job.

Put that lot together with Natalie, the spoilt daughter of Gillian Livingstone, and you have an immediately entertaining mix, with Calum like a spider in the middle of an occasionally fragile web. Calum wants to mount an expedition to Georgia, to the foothills of the Caucasus mountains, in search of the fabled Almasti, a possible Neanderthal survivor whose DNA Calum believes could ultimately enable him to regain the use of his legs – and if not from the Almasti, maybe from some other creature previously unknown to science.

There are thrills and spills, villains who would probably twirl moustaches if they had one and technology that’s never too far-fetched to make belief hard to suspend. There’s also a subversion of the original stories in a way that makes them far more palatable to this day and age. Lane says in his author’s notes that it doesn’t really matter to the story whether Calum is related to George Challenger or not, but I beg to differ on that one.

For adult readers familiar with the original books the connection adds depth, even the names of some of the subsidiary characters provoke curiosity over what subtleties Lane is intending in future books, and if it serves to send any readers, young or old, in search of the originals, then that’s even better, as like this, they’re damn good adventures. I want to see more of Calum and his friends and I wish I didn’t have to wait a year for the next one!