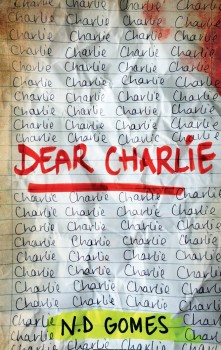 Sixteen-year-old Sam has to come to terms with the fact that his older brother Charlie committed a horrific school shooting, and this isn’t easy in a town determined to treat him and his family as pariahs.

Sixteen-year-old Sam Macmillan and his parents are struggling to come to terms with a horrific shooting massacre carried out by an 18-year-old boy at Pembrook Academy in England in 1996. But there’s a big difference between the Macmillans and the families of the other children and teachers who died that day. It was Sam’s elder brother Charlie who pulled the trigger, and kept on pulling it, and because Charlie also died that day, they still don’t know what motivated him, but as ever, the press is rife with speculation.

Dear Charlie starts as a letter written by Sam to his dead brother, and then progresses into Sam’s own narrative as he struggles to come to terms with the disintegration of his family and the horrible reality of being an outcast in his home town and at his new school. No one seems inclined to cut Sam or his family any slack. They have bricks thrown through their windows, graffiti is daubed on their house and on Charlie’s memorial stone, and Sam is bullied relentlessly.

Things start to improve for him when a group of teenagers seem prepared to accept him, and for the first time since the massacre, Sam gets the change to behave like a normal boy, just hanging around and chatting, going to parties and listening to music. Naturally there are some complications, mainly in the form of pretty, sparky Izzy, who’s going out with Dougie, the group’s acknowledged leader.

ND Gomes’ powerful debut throws the reader in at the deep end in Sam’s confused, excruciatingly painful thoughts and emotions. He gives his therapist a hard a time, and it’s not difficult to see why. His life has been turned upside down and inside out and all she seems to do is try to get him to talk about his feelings. Not the easiest of sells to any teenager boy, and it’s even harder when you’re the brother of a mass murderer. Sam’s parents aren’t much help, either; they seem intent on tearing each other apart, whilst simultaneously totally ignoring Sam. I spent a lot of the book wanting to bang their heads together, but gradually, I started to see the world through their eyes as well, in a testament to the strength of Gomes’ writing.

But it’s Sam himself who’s at the heart of this complex, heartbreaking book, and he fills every page with the feelings he finds so hard to talk about, but which come more easily to him in the form of the journal his therapist has advised him to keep. There is the occasional misstep along the way, mainly in the form of some Americanisms that have crept into the story, betraying the fact that the author divides her time between the UK and the US, but those are nothing more than minor quibbles.

This is a strong YA debut that will get under your skin from the first few searingly honest pages to the emotion-packed conclusion. There are no easy answers in a situation like this, and Gomes never attempts to offer any, nor – refreshingly – does she descend at any stage into amateur psychology. But you’ll learn a lot about Sam and his journey from hate to hope, you’ll maybe also confront the uncomfortable questions of how you might react if you were unfortunate enough to be close to a tragedy of this magnitude. This is one of those books I devoured in a single day, so be warned. And have some tissues handy.