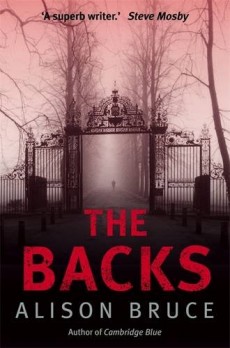 Procedural is a slightly dubious appellation for this fifth novel involving Gary Goodhew – he really doesn’t do procedure which is probably why that, despite his undoubted ability, he is still a DC. In an age when policing is relentlessly politically correct, by the book, join the dots and watch the CCTV, there is little opportunity for an obsessive and unpredictable loner, however talented he may be.

But despite his character flaws Goodhew is a thoroughly believable character – a combination of intelligence and dedication, unpredictable, hardly socially adept, inclined to follow his own instincts even if they clash with his orders. Part of the charm of this series is his relationship with his inspector and the gradual mellowing of DI Marks, a good, old-fashioned copper, who has come to respect the younger man’s insights and try to at least point out the consequences of his more unorthodox actions.

A female paramedic comes across a young woman, unconscious and bleeding, in a Cambridge garden. As she attempts to help and phones for assistance, she, too, is stabbed. Meanwhile, Goodhew has stopped at roadblock diverting traffic from a burning and extremely expensive car. The fire looks like arson and its positioning – on the highest point for miles – seems deliberate. A horrifyingly logical thought process leads him to the badly beaten body of a man lashed to a tree with wire. The unrelated arrest of a shoplifter in Leeds reveals that she is wanted by Cambridge police in connection with a seven-year-old murder.

These three apparently unrelated events set the scene for Alison Bruce’s latest intricate and darkly absorbing tale. The plotting is, as always, immaculate. There are no literary tricks, everything is explained and the sheer force of the story, covering obsession, murder, drugs, some very kinky sex and student prostitution keeps you turning pages. If one or two of the characters seem a little overdrawn, this is, after all, the hotbed of a university city where excess often equals success.

Bruce's writing is intelligent and crisp with her superb descriptions of Cambridge providing a touchably real background to a fine piece of work. Her unusual and interesting main character and her ability to ratchet up the tension, combined with some realistic characterisation and a sympathetic understanding of the problems of police work, make her one to watch.

This is a book for the crime purists who don’t want to get bogged down in unlikely and sensational action, but do want their minds stretched by an intelligent plot in a believable setting. Goodhew will doubtless be back – and I’ll be waiting for this complicated, but fascinating detective with interest.