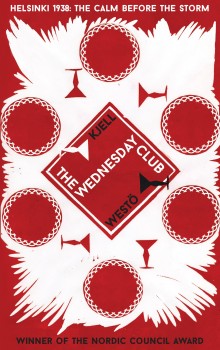 Memories of the Finnish Civil War in 1918 affect everyone: members of the exclusive Wednesday Club, run by a lawyer Claes Thune, and also his secretive working-class secretary Mrs Matilda Wiik. It’s 1938 and Hitler’s expansion in Europe causes both admiration and anger. The past and present collide.

The Finnish Civil War, lasting under four months in 1918, remains one of the most emotionally charged events in history of Finland. The Swedish middle and upper classes (the Whites), inclined to support Germany, fought against the Finnish proletariat (the Reds), supported by the Russian Bolshevik regime. The events of the past have bitterly divided the country after the WWI and affect the characters in the novel.

The titular Wednesday Club was founded in the autumn of 1927 by the lawyer Claes Thune and his five friends ‘to contribute to the maintenance and exploration of political and cultural conversation in the Swedish language in the city of Helsinki’. The monthly meetings became an exclusive gentlemen’s club, an opportunity to talk and drink, enjoy fine food and debate various topics, such as hatred towards real and imagined enemies, and the unconditional love for a mythical, feminised mother country: the Finnish Maiden or the Mother Russia.

Yet as the political situation in Europe escalated in 1938 a darker cloud hovered above the men, two liberals and four of the right-wing persuasion. Always eager to voice their political alliances and feeling comfortable in their knowledge and confidence that their position is safe, they are disturbed by the world’s events.

Hitler’s expansion causes both anger and admiration. Mussolini is the talk of the rich classes. Attitudes towards other nations worsen, and that change is aimed at Jews, Finns and various other ethnic groups in Finland.

Into this established status quo enters his new secretary Mrs Matilda Wiik from a working-class background. Mrs Wiik carries constant guilt that years ago she was unable to protect her younger brother Konni, a talented musician and band leader, now emotionally damaged and prone to violent outbursts. More heart-rending are the repressed memories of her time as a prisoner. But she is efficient, impeccable, reserved and cautious; and her curt precise way of speaking hides loneliness.

Thune is aware of the undercurrent of strong emotions but divided by their social positions he never invites such confidences. However, a subtle respectful professional friendship develops between these two lonely people.

Then one day Mrs Wiik hears a voice that she hoped never to hear again, of her tormentor 20 years ago when she was barely 17, taken from the street to the starvation camp. Her ‘crimes’ were her mother’s Russian heritage and her father’s apparent communist sympathies.  Still traumatised by the repeated silent rapes, inflicted by the ‘Captain’, a camp official, she is shaken when she encounters him at the Wednesday Club meeting at Thune’s office. The anonymous Captain is drawn to her. But this time Matilda Wiik doesn’t want to be a powerless victim. Her absence at work some time later starts to trouble Claes Thune.

Kjell Westö, one of the leading Swedish-language writers in Finland, is definitely in Thomas Mann’s league and I would absolutely recommend his fine thoughtful work in Neil Smith’s sensitive translation. Hägring 38, the original title of The Wednesday Club, means ‘mirage’ and as such it reflects the historical situation in Finland, the social attitudes and unrealistic dream of calm. Part historical novel, part crime mystery with elegant measured prose, sophisticated language, and truly contemporary feel though the events are firmly based in the turbulent past, this is a book to be savoured and treasured, to be read slowly as the universal truths sink in.