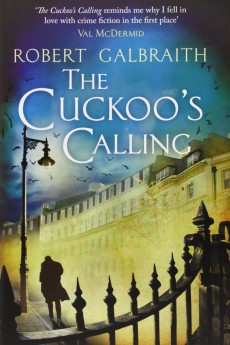 I did my absolute best to approach this book with no pre-conceptions. But I so wish JK Rowling had been able to keep her anonymity, and I'm sure she does too. It's not like she needs the dosh, or anything, and she must long to write something where people aren't demanding a return to wizards, quidditch and flying owls.

The Cuckoo's Calling is really very good indeed, and I can see why Val McDermid says on the cover that it reminds her why she fell in love with crime fiction in the first place. It's what Rowling does best - weaving a world and telling a good story. And here she has plenty to work her magic with, as the action shifts from a tatty central London office, to wealthy apartment blocks, to celebrity nightclubs.

In many ways it's a classic crime novel of the old school, with violence off-stage and a traditional unveiling of the villain, accompanied by some neat red herrings along the way. The Cuckoo's Calling features Cormoran Strike (his name is about the only naff element of the book!), a former soldier wounded in Afghanistan, who's trying to save his rapidly-failing PI business.

Cormoran, who is sleeping on a camp bed in his office after splitting up with his girlfriend, is handed a lifeline when the brother of a dead schoolfriend turns up, wanting him to investigate the death of his sister. Lula Landry was a model - a magnet for the paparazzi - who fell from the balcony of her exclusive Mayfair apartment.

The Cuckoo's Calling proceeds at a measured pace as the meticulous Cormoran, an ex-military policeman, pieces together what happened that snowy night. But that doesn't make this book slow - Rowling is too much of a storyteller for that. So yes, it's an old-fashioned page-turner.

Cormoran has a thoroughly lovely assistant in the shape of Robin Ellacott. She turns up unexpectedly from a temping agency to be his PA, and finds that this strange bear of a man and his lifestyle to be a far cry from her respectable existence with fiance Matthew.

They turn out to be a surprisingly dynamic duo. Cormoran is solid and tenacious; Robin is internet-savvy, gutsy and independent. He might not tuck his shirt in his underpants, but this sidekick stops him going out with his shirt buttoned wrongly!

I was amused by one commentator saying (wise after the event) that a man couldn't possibly have written the book, given the author's eye for fashion and tendency to mention what people look like and wear. Maybe that's true, but then the fashion industry features heavily in The Cuckoo's Calling.

I am desperately sorry that JK Rowling had her cover blown, and I hope she'll make this a series. The Cuckoo's Calling is a book that deserves to be read on its own merits. It's crime fiction that gives you the warm fuzzies!