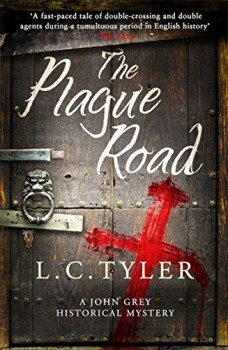 Who killed actor/spy Charles Fincham? And what is the secret of the letter he was carrying from Charles II’s brother to the French ambassador? In plague-hit London, rising young lawyer and civil war intelligence officer John Grey must find out.

It is 1665 and the Plague grips London. From the King down, everyone who can has fled. The only sound is the grim cry of ‘Bring out your dead!’ If you’re going to murder someone, where better than to hide the body in one of the plague pit mass graves?

When a corpse with knife in his back is found in such a pit, justice demands a report. When the man is identified as an actor and small time spy known to have been carrying a secret letter from the Duke of York, brother of Charles II, to the French Ambassador, action must be taken.

In the febrile political situation of Restoration England, court factions bid for supremacy and influence and there is still the threat of a return to war, with secret Catholics, including James, Duke of York, and diehard republicans feeling betrayed by King Charles’ relaxed attitude to morals – and almost all else except his own pleasure – at each others’ throats.

Rising young lawyer John Grey, a former Cromwellian intelligence officer, is called in by Secretary of State Lord Arlington to recover the missing letter – which he believes will compromise the Duke and also those around him. Arlington is not the only one bidding to find the letter. Somebody has killed to obtain it – and is prepared to kill again. At the risk of his own life, Grey is forced to journey through plague-ravaged England to fulfil his commission – and keep one step ahead of both the dread disease and his unknown enemies!

This is the third book in LC Tyler’s clever and atmospheric Restoration series, but works equally well as a standalone. It expands on the unconventional relationship between Grey and the royalist playwright Lady Aminta Pole – her satirical poem The Puritaniad, is an absolute masterpiece and provides brilliant chapter breaks – and is populated by some fascinating characters. The greedy and self-seeking diarist Samuel Pepys and the bewitching and predatory courtesan Lady Castlemaine, the King’s long-time mistress, have key parts to play.

As a series, Grey’s adventures have now come into their own. While parts of the earlier books were occasionally stilted, this sometimes dark story is superbly plotted and structured with the pace maintained right through to a surprise – and historically truthful ending which was to remain hidden from the British people for another 200 years or more!

Tyler manages the switch between grim descriptions of the Plague and its victims and the impact the disease generates in communities across the south of England and the main story of the quest for the letter with a sure touch.

The totally understandable, if ugly, fear is captured so well – and offset by some quite brilliant flashes of humour. Grey has a devastating turn of phrase, reserved for the pompous or those who bore him, which marks him as a man destined for the top of his profession and the lovely Lady Pole is an outspoken and determined joy in an age where women were very much regarded as the weaker sex.

Tyler’s interpretation of this fraught, but fascinating, period in England’s history is a delight for readers seeking a good mystery tale in a realistic and well-researched setting.