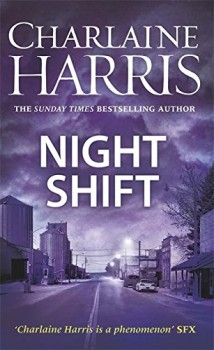 Something old and dangerous is stirring under the crossroads in Midnight, a town populated by vampires, witches, angels and even some normal people. Fortunately the community works together to overcome the threat to their existence.

Although the people of Midnight are used to extraordinary behaviour and activities, they are all made very uncomfortable when relative strangers ostentatiously commit suicide on the crossroads in the middle of town.

Fiji Cavanaugh is a young witch with a shop selling magical items. Lemuel is a vampire, trying to translate an ancient book which he believes is of great significance. Joe and Chuy, who on the surface appear to be a comfortable gay couple with a pet pekingese, are actually angels. Quinn, the Rev and Diederik are a family of weretigers, graced with feline strength and charm. Into this community comes Kiki, Fiji’s obnoxious sister, and other ‘normal’ people who all appear to also have their own agendas. What becomes apparent is that something ancient and dangerous is awakening in the town and together the mythical population must work to overcome the threat.

This is the third book in the Midnight trilogy and I suspect that I would have found it easier to access the characters if I had read the previous two. That being said, after a few chapters I found myself liking the protagonists and their curious interrelationships. I wanted them to succeed. I cared about their romantic leanings. I wanted them to defeat the threat that hung over them.

The characters are interesting. The fact that the vampire chooses to live as he does, sharing his life with a human, feeding on energy as well as blood engages your interest. The were tigers are a novel introduction and the notion that the handsome young man, Diederik, is actually less than a year old is intriguing. The way that the magic done by the witch is almost prosaic, in this unusual setting, makes the context of the action seem real. I really like Charlaine Harris’s creativity.

The novel evokes many different references. It has a feeling of the 1970s about it, a time when interest in the supernatural was becoming commercially attractive. It feels like a blend of Bewitched, Tarantino’s From Dawn to Dusk and Buffy the Vampire Slayer, but it works.