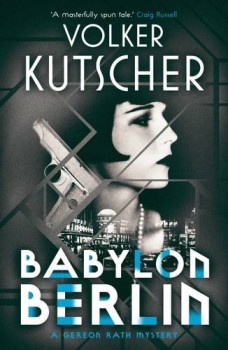 A car is found in the Landwehr Canal and in the car is a man who has been brutally tortured. DI Gereon Rath, although not a member of the Homicide Division, decides to investigate.

Detective Inspector Gereon Rath has been re-assigned from the Homicide Division of the Cologne Police force to the Vice Division of the Berlin Police. His move had become necessary following his shooting of a man who had been firing at passers-by. It turned out that the man was the son of an important newspaper publisher who decided to make Rath’s position impossible by printing frequent articles blaming him for his son’s death. Eventually, Rath’s own father – a high-ranking police official in Cologne – persuaded the Commissioner of Police in Berlin to take him on transfer.

Berlin under the Weimer Republic was very similar to New York in the ‘Roaring Twenties’. For those who could afford it the night life was wild and exotic. There was little difference between a night club, of which were many, and a brothel. Drinking until the early hours was common and along with the drunkenness came drug-taking. If the night life was licentious, daily life could be dangerous. The Weimar government was quite unable to control the various political gangs, both Communists and the growing National Socialists or Brown Shirts. Taken together with the simply criminal, the Mafia or Ringverein, they created an element so lawless that the CID divisions – Homicide, Vice and Political – were hard put to contain it. The author is very successful in creating what is almost a documentary feel, whilst at the same time sustaining a very strong narrative.

The novel begins in a dramatic fashion with the description of a man who has been tortured seeking to end his life to avoid further pain. It continues with a different kind of drama as Rath pursues a man up the scaffolding of a building under construction. After this the pace slows and the novel becomes more of a police investigation, though by no means a conventional one.

It could be argued that there is rather too much in the way of plot and perhaps too many characters. The romantic element, for example, is half-hearted and could have been omitted entirely without any significant loss. There is also far too much time spent talking about travelling in Berlin. Clearly, the author is very familiar with the city, but for those who are not such detail can be boring – not to mention unnecessary. It has the effect, particularly in the middle section of the book, of slowing the action down.

However, it has to be stressed that the author sustains more than enough interest by creating uncertainty in the mind of the reader, together with a desire to find out how the various strands of the story are going to be brought together. There is a surprise development towards the end of the novel – one that is entirely believable – as we discover who the real villain is. The circumstances under which we find out see a return to the thrills of the opening – an ending that more than makes up for any criticism about the length and complexity of the plot.