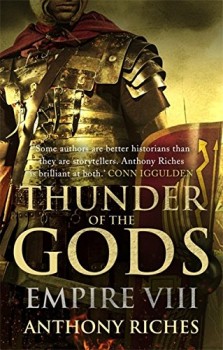 Thunder of the Gods

Marcus Aquila and his Tungrian cohort are sent east on a desperate mission to save a key fortress and halt a war which could destroy the Empire.

Anthony Riches is undoubtedly a fine military historian, but it is his understanding and absolutely realistic portrayal of army life at every level which puts him on a par with Bernard Cornwell at the very top of the genre.

His second century hero Marcus Valerius Aquila, from a high-ranking family murdered by a mad Emperor, masquerading under the assumed name of Corvus, is at least the equal of Sharpe for breath-taking adventures. But it is his secondary characters, other officers, senior NCOs and rankers who bring the story so realistically to life. The internal politics, the rivalries, the black humour, the banter, booze, brawls, brothels and barrack room language he specialises in is something all veterans will recognise – my own regiment had far more obscene marching songs about Marines than Riches’ Tungrians could manage in print!

The eighth book in the pulsating, all-action Empire series which has stretched from the wilds of Hadrian’s Wall to Germany, parts of Romania and Moldova, Bulgaria, Serbia, Hungary and the Ukraine and the nest of vipers at the heart of the Roman empire, now moves deep into Rome’s most easterly holdings in modern Syria, Turkey and Iran, on the edge of the Parthian empire.

The plot involves Riches’ usual strong mix of action and politics, both Roman and among the loose confederation of Parthian kings. After a slowish start, where he employs the device of using current characters recounting past events to each other to bring new readers up to speed, it is soon at full bloody throttle.

Those new readers may find it easier to start at the back with Riches’ 20-page explanation of the history surrounding the story and the structure and order of battle of the various units involved!

After their involvement in another upheaval in Rome, the empire’s capital is no longer safe for Marcus and his colleagues. They are ordered east on what looks like a suicide mission to the resurgent Parthian empire, again threatening Roman influence in an area which dominates the fabulous and money-making Silk Road to the Far East.

The Tungrian cohort must raise the siege of a key fortress, together with the locally based Third Gallic Legion. But the once famous unit, raised by Julius Caesar, has ‘gone native’ and is in no state to combat the horse archer, armoured cataphract Parthian combination which has so far proved deadly to those who have faced them.

They must also cope with a corrupt provincial governor, prepared to go to any lengths to protect his influence and income. When, as usual with any army, the plan fails to survive first contact, Marcus is forced to travel to the Parthian capital to persuade the King of Kings to halt a war that promises the slaughter of his friends and could threaten the eastern Roman empire.

Although Marcus ‘Two Knives’ is still the central character, Riches makes far greater use of his supporting cast to flesh out this rip-roaring tale. Legatus Scaurus, a dream colonel for an elite unit, steps centre stage, the surprisingly intellectual senior officer employing just about every trick Roman armies used over several centuries to neutralise the Parthians’ lance and bow combination. Others too emerge from the fog of war. Varus, a young Three Gallic Tribune who has watched his cohort slaughtered, a grim opening scene which sets the tone for the story, comes of age, plus there are familiar characters from within the Tungrians.

This strong cast fronts a portrait of ancient warfare at its most visceral and visual, plus Riches’ love of unexpected surprises. Deadly combat, nail-biting tension and gut-wrenching emotion, leavened by dark, earthy humour and camaraderie make this about as good as it gets for lovers of raw and rugged Roman fiction.

If you’re new to Empire, you can read this as a standalone, but I’ll take a good bet at short odds that you will soon be searching for the earlier episodes! Not only are they all compelling action reads, but each also illustrates features of the Roman Empire and its military towards the end of the Second Century, things that made Rome great, but would also lead to its collapse.