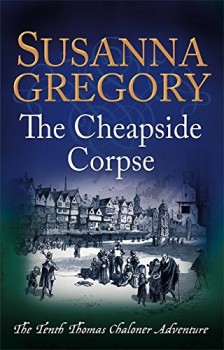 Intelligencer Thomas Chaloner must solve the killing of an unpopular banker in a Restoration London threatened by war, civil unrest and plague.

The prolific Susanna Gregory, queen of the history-mystery thriller genre, is back with her tenth story featuring Restoration intelligence man Thomas Chaloner. Clever, ingenious plots, an atmospheric portrayal of time and place, a blend of real and fictional characters – all except the principals in this convoluted tale are genuine, though I suspect some would spin in their graves at the roles assigned to them – and flashes of wry humour, are the trademarks which have made Gregory the mistress of her craft.

It goes without saying that the historical details are as accurate as research can make them, right down to the so-called Cheapside Hoard, discovered in 1912 and now in the London Museum. But it is Gregory’s ability to capture mood which sets her apart.

The year is 1665. England is in turmoil. The excesses of Charles II and his libertine court are turning a country not long freed from Cromwell’s Commonwealth against its aristocratic rulers. There is little money to prosecute the naval war against the Dutch. In fact, Charles effectively declared the country bankrupt just seven years later.

With the possibility of invasion looming and plague again threatening his capital, the king’s lack of control or decision-making has sparked an atmosphere of fear and confusion. Riots, or even open revolt, threaten. Greedy goldsmith/bankers – there were no organised banks – stoke the flames with increased interest charges on loans. Small businesses go to the wall. Thousands of London’s poor starve as crime flourishes.

This mood of confusion encompasses Chaloner too. An average ex-Parliamentary soldier with some skills as a thief himself, he is beset by his extravagant wife’s debts, worried by the relationship with his employer, the petty, selfish Lord Chancellor, the Earl of Clarendon, and at odds with Charles’ official intelligence service. He finds solace only in his music.

Tasked with solving the murder of an unpopular banker, at the same time discovering why an alleged spy, now dead of plague, was allowed to spread the disease – and discovering why his master was short-changed over the new invention of curtains – he is not, unnaturally, confused. You will be too, as Chaloner’s various investigations are thwarted by the Cheapside financiers and a local crime boss. But blunder on with him as he tries to discover the truth, through a series of dangerous encounters where he has only his wits and determination to keep himself alive, and you will be rewarded with another imaginative and compelling read.

Personally, I prefer Gregory’s other crime solver, the 14th century Cambridge medicus and corpse examiner Matthew Bartholomew, now up to book 20! But as an example of a fairly ordinary man with a far greater than average resolve and a devotion to truth, Chaloner and his brilliantly portrayed Restoration background take an awful lot of beating.