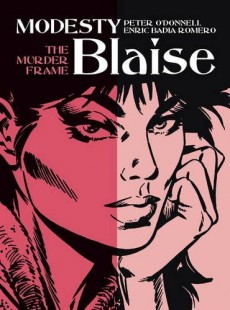 Four stories featuring Modesty Blaise, one of the greatest kickass heroines of all time, and her ever-reliable companion, Willie Garvin.

As ever, I was delighted with Titan’s latest comic strip book featuring my all-time favourite characters, Modesty Blaise and Willie Garvin. I did a very passable impersonation of an over-hyped kid on Christmas morning when this landed on the mat. I promptly ripped off the packaging and returned to a blanket fort on the sofa in the company of two of my oldest friends. It had been a bad week, and I knew these two would make me feel better.

In The Murder Frame, we get a glimpse of Willie’s life as the owner of a rural pub when an argument kicks off with one of his customers, the unpleasant Sir Arthur Brockley, who isn’t happy – to put it mildly – with Willie’s opposition to a planning application he’d been hoping to push through unopposed. The man’s son is what could politely be described as a nasty piece of work, and this time it’s Willie who’s in trouble and Modesty who rides to the rescue when someone does their best to put Willie in the frame for a murder he hasn’t committed.

The story is intricately plotted and inventive, with an apple-throwing fight in a churchyard that demonstrates that Modesty and Willie are always at their best when a caper involves improvisation. There are also welcome appearances by two of Peter O’Donnell’s host of minor characters who lend colour and depth whenever they come along: Maude Tiller and Lady Janet Gillam, both girlfriends of Willie’s and friends of Modesty.

The next story in this collection also concerns a character that I can never get enough of, the self-effacing former field agent, Jack Fraser, now spymaster Sir Gerald Tarrant’s personal assistant. In Fraser’s Story, we get to see a rare glimpse behind the façade that Fraser has carefully built up around himself when he gets the opportunity to revenge himself on a man who was responsible for the death of several agents during the Cold War, including a woman that Fraser had worked with on many missions and had developed feelings for. Mary Dainton was captured and died under interrogation, leaving Fraser with a deep hatred of the man responsible for her death, and so when an opportunity comes for revenge, Fraser seizes it with both hands.

Fraser’s Story shows us the tough, unrelenting agent that Jack Fraser was – and still is. Artist Enric Romero paints and uncompromising picture of the abuse Fraser suffers at the hands of the man he’s determined to kill, and his striking pen-portraits reveal a man pushed to the limits of endurance and beyond. Fraser is drawn very differently to Romero’s other men, making this the backstory I’ve always wanted to read, providing a character I’ve always loved with even greater depth.

Tribute of the Pharoah also takes a trip to the past, this time to the part of Africa formerly known as the Kingdom of Kush and we learn more about both Modesty and Willie in their younger days. Readers of the book and the comics will remember that as a girl, Modesty travelled vast distances in company with Lob, an old man who used to be a university professor. Modesty received much of her education from him, and together they would often seek refuge and sleep in old tombs. In this story, a nightmare drives Modesty to consult a demon from her past and to one of those places. On the way, they prevent the kidnapping of Miss Prendergast, a woman who once had the misfortune of trying to teach the younger Willie Garvin.  It’s always fun to see Willie wholly under the thumb of a woman, and the utterly indomitable Miss Prendergast is still capable of running rings around her former charge.

Willie has woman trouble again in Special Order, but this time, it’s his young friend Sam who is in danger, on a judo club trip to the Far East sponsored by Willie and Modesty. In a story that showcases how bang up to date so many of O’Donnell’s stories still are, Sam is taken by a gang trafficking in women and girls who are being kidnapped to order for buyers who have made their exact requirements known. It’s a chilling enough scenario at any time, but made worse by the fact that tough, street-wise Sam is only 15.

One of O’Donnell’s great strengths is his enviable ability to write strong female characters of all ages and backgrounds and in his capable hands, they never feel forced. Special Order shows the depth of affection between Modesty, Willie and their young friend, with Modesty doing her best to keep a lid on Willie’s at times rather desperate mother-hen act, as it’s clear just how much he worries about Sam. It was also great to see Modesty deliver a well-deserved telling off at the end of the story, making the point that his friendship with Sam doesn’t need to change just because she now comes complete with ‘squidgy bits’!

O’Donnell’s stories are always fast-paced, beautifully choreographed and thoroughly modern, no matter when they were written. Although technology in some areas has come on in leaps and bounds, that never seems to hold back or age the stories, providing a constant reminder of quite how far ahead of his time Peter O’Donnell was. Modesty and Willie are always at their best when facing seemingly insurmountable odds, and this collection gives them plenty of opportunity to shine. And as ever, they all come vividly to life in the brilliant hands of artist Enric Badia Romero. Excuse me, I’m just off to indulge my love for beaten but unbowed Jack Fraser again….