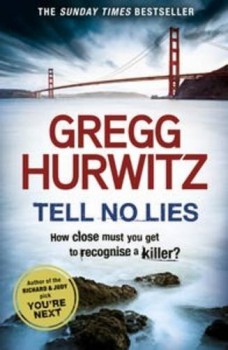 Daniel Basher, the son of Evelyn Basher – one of San Francisco’s old rich – lives in a comfortable home in a nice part of the city with his beautiful wife Cristina. To counter-balance this comfort, he works as a probation counsellor, overseeing group therapy three times a week for some of the city’s most underprivileged kids, young ex-cons and first-time criminals looking more or less to change the paths they’re on.

He loves the challenge of the job, but even as Daniel still yearns for the adrenaline highs that come with working in such a potentially dangerous environment, he’s making plans to move on, to start his own private practice catering to those who can afford to pay for his services.

One night, having collected a week’s worth of mail from his pigeon hole at work, he finds a death threat amongst the envelopes, not addressed to him but to a Jack Holley, telling him that he has until midnight on November 15 to ‘admit what he’s done or he’ll bleed’, a threat that is already several days out of date. A quick check of the news websites while they’re waiting for the police turns up a Jack Holley found dead on the morning of November 16.

Then Daniel finds two more notes, two more death threats in his mail, both addressed to strangers, and he suddenly finds himself at the centre of a manhunt for a serial killer who may or may not be one of the kids from his group sessions.

The novel, which is set in two diametrically opposed San Francisco worlds, is firmly grounded in the gritty and brutal projects. At the same Daniel Basher bridges the yawning gap between the privileged and the poor, those who only have to reach for the phone to get what they want and those who lose everything no matter how hard they fight for it.

The inventive plot, well-paced narrative and expertly-crafted characters kept me reading avidly almost right up until the climax, where – sadly – the writer gets lazy and falls back on an infuriatingly predictable finale. From the moment the killer is unmasked the story slides down the slippery, well-worn slope of the ‘damsel in distress’ ending, something that we should have long ago seen the back of. The only reason I kept reading was in vain hope that my fears were misplaced, but they weren’t. It’s a shame Gregg Hurwitz felt the need to rehash such an outdated idea, especially when the rest of the story feels fresh, creative and above all intriguing.