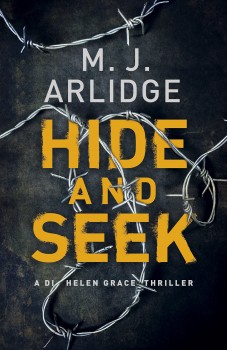 DI Helen Grace, disgraced, despised, and a Holloway inmate, could not be in a worse place to find a ruthless serial killer.

DI Helen Grace is in Holloway Prison awaiting trial. She is accused of triple murder, and hounded by Emilia Garanita, a freelance journalist who is milking the former detective’s fall from grace, Helen is just about the most hated woman in England, both in and out of Holloway prison. Utterly alone, but unable to hide from the hatred and contempt, Helen is simply trying to stay alive and in one piece.

On the outside, there is only one person who believes Helen was framed; DS Charlie Brooks, who is trying to hunt down the real murderer, Helen’s nephew.

Leah is serving life for killing a woman and her unborn child. Despised by her fellow inmates, she is in fear for her life. She needs a transfer, needs to be closer to her children. But there’s only one way she’s leaving her cell. When Leah’s mutilated body is found in her locked cell, Helen’s detective instincts take over. She must find the ruthless killer.

I was rather concerned at jumping in on the sixth book in a detective series; rather like going to a party where I’m the only new face. But this book was so well written, that without an excess of backstory, I soon got to know my fellow party-goers.

Hide and Seek is written in the third person omniscient point of view, with chapters rarely longer than two or three pages, and the story leaves the reader deliciously breathless. Aldridge brings his characters and backdrop to life with little word-wastage. His vignette style of writing keeps a tight rein on the relatively large cast of characters, which makes for easy reading. He uses an excellent choice of language to create the despairing atmosphere of prison. And the same applies to the prisoners’ emotions, ranging from anger to fear, with everything in between, as the body-count rises.

The only moment my brow furrowed, questioning the plausibility of Helen Grace’s investigation, was the relative ease with which she got around the prison undetected. Perhaps Aldridge played down the effort required, to keep the story moving forward. Or maybe our prisons really aren’t as secure as we would like to believe!

The story was not without other hiccups; I began to doubt Helen’s prowess as a detective, with the number of times she homed in on the wrong suspects. Some of the red herrings were a little obvious. The clear-thinking of Helen’s nephew, a ‘successful’ serial-killer who is injecting heroin, seems rather far-fetched. And while meeting the victims’ families certainly made the reader feel for the dead criminals, it did little to drive the story. But these details, in the end, did not seriously detract from a dark, gripping page-turner.