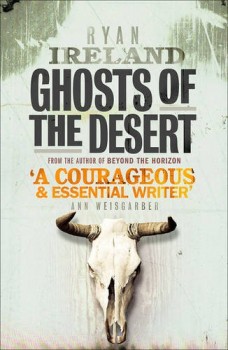 Ghosts of the Desert

Anthropologist Norman is in the Utah desert studying ghost towns when he is made prisoner by a tribe of outcasts whose moral code horrifies but whose outlook he finds ultimately compelling.

A man called Jacoby and the group he leads abduct anthropologist Norman in the desert, and destroy the vehicle in which he has been living. They retreat with him to their home in the decrepit remnants of a ghost town – Jacobville - far from other settlements, sustained only by occasional murders undertaken for some government agency, and the bodies of their victims.

Although many aspects of the lives of the Jacobvillites are horrifying, Jacoby has a strong philosophy which holds the group together. ‘The narrative is this: Most of the world does not want to think for themselves’ (sic). War is coming, and Jacoby and his tribe are the only ones standing up to prevent wholesale slaughter.

Unintelligible as Jacoby’s pronouncements undoubtedly are, Norman finds himself half persuaded, and when his escape to the nearest small town is met by hostility and suspicion of Norman himself, Norman returns to the tribe, as Jacoby has foretold. A showdown with another family of misfits looms, however, which threatens to end the way of life Norman has adopted.

This is very weird book. Much of what happens has a kind of dream-like quality to it, especially in the desert but also to Norman’s life back at the unnamed academic institution from whence he came. This is heightened by the horrific events which occur: rapes, necrophilia, cannibalism, multiple murders. It is all terribly unsavoury.

The writing is sufficiently powerful to create a compelling picture, but ultimately I feel few readers would be inclined to stay with the story to the end. The first half of the book, which establishes Norman’s psychic adjustment and his acceptance of his fate with Jacoby, may be well done but is very slow. It is only towards the end that there is any action, and then this is brief.

Some readers will also find it irritating that the justification or explanation for the way of life espoused by Jacoby, when it finally arrives three-quarters of the way through the book, is such nonsense. If you have to wade through hundreds of pages of gore and unpleasantness, you do hope to find at least a marginally plausible rationalisation at the end of it.

Those who like experimental literature may find something here, providing they are not too particular about grammar, and have strong stomachs. The rest of us would no doubt find plenty of reading matter elsewhere to be greatly preferred.