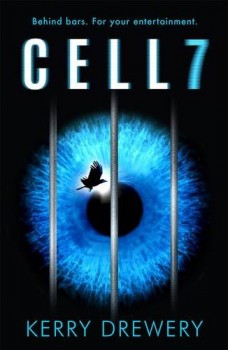 Sixteen-year-old Martha Honeydew is on death row for killing a much loved celebrity. The people get to be the ones to decide whether she lives or dies.

In an age where every other TV programme seems to be some form of ‘reality’ show, it’s not hard to imagine a world where Judge Rinder has been taken to extremes with anyone who can afford the price of a phone call, text or online subscription being able to vote someone innocent or guilty.

But in Kerry Drewery’s frighteningly realistic future, not everyone is connected to the internet, and not everyone can afford the price of the phone, although there are others who can work on the basis of the old joke about Northern Ireland elections and will ‘vote early, vote often’. After all, it works on Strictly Come Dancing, so there’s no reason why it shouldn’t work on primetime TV programme Death is Justice.

Sixteen-year-old Martha Honeydew is the first teenager to end up on Death Row and already the mob is baying for her blood. She is accused of shooting to death media darling Jackson Paige, a celebrity who shot to fame and fortune via another reality TV show and used his influence and money to support a variety of charitable causes. Martha was found standing over his body with the murder weapon in her hand and – more damningly – she is caught on police camera confessing her guilt. So, for Martha, it looks like an open and shut case.

Martha starts off in Cell 1, and will progress, each day, via another cell to Cell 7, where she will await the public’s decision. Will she live or die? Her designated counsellor, Eve Stanton, isn’t convinced of Martha’s guilt, and she’s determined to do what she can to save the girl, but with the clock ticking inexorably, the odds are stacked against her client.

The world Drewery conjures up so effortlessly is harsh and cruel, with no place or evidence or mitigating circumstances. Courts have been abolished and ‘justice’ is now in the hands of the people. Amidst the wreckage of post-Brexit Britain, where child refugees are dismissed as insufficiently ‘childlike’, it isn’t difficult to imagine a country where rule by ‘the people’ has been taken to its inevitable conclusions. Bread and circuses always was a sure fire crowd pleaser as the Roman emperors knew all too well.

I was utterly engrossed in Martha Honeydew’s story, told in short, sharp chapters, mainly alternating between her (in the first person) and counsellor Eve Stanton (in the third person). These are interspersed with script format insights into the world of Death is Justice with its heartless presenter Kristina Albright, a woman who’s very happy to dispense with any notion of truth in favour of whipping up higher ratings.

Drewery has a sharp eye for characterisation and a pitch-perfect ear for dialogue. The story gathers pace matching Martha’s progression through each day and each cell. The background to the killing of Jackson Paige unfolds in Martha’s thoughts as she tries to come to terms with the inevitability of her own death. There are times when the book is almost painful in its intensity, but backing away wasn’t an option. I was wholly absorbed in the story of Martha’s life and the prospect of her all too imminent death.

I just very fervently hope that no one in our current government reads this brilliant young adult thriller, as in today’s hate-filled climate, Death in Justice might very well end up as an extreme way of cutting both the Legal Aid bill and the costs of our court system at one stroke. After all, we’ve all heard the cry that we don’t need experts any more and that the people have spoken, so let’s all hope just they don’t get the chance to speak on this subject as well.