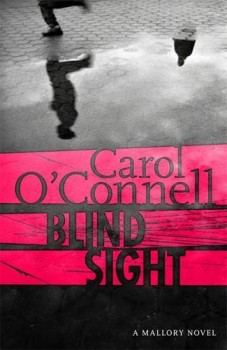 Four bodies are dumped on the mayor’s lawn, one of them a nun, whose brother is also missing. Detective Kathy Mallory ruthlessly follows every lead to rescue the boy.

This is the 13th novel featuring Kathy Mallory, a detective unlike any other in the New York Police Department. Bodies found in the garden at Gracie Mansion suggest a link to the mayor himself, Andrew Polk, a man who defrauded a long list of very rich people in a financial swindle. But apart from the nun, the bodies are of poor isolated individuals apparently selected at random.

From the beginning we hear about the man carrying out the murders, a contractor with years of experience and unorthodox skills. We are also introduced to the middle-man who hired him, another careful professional. The man who offered the contract and its purpose, however, remain obscure until the final pages.

It is the nun who most engages Mallory’s attention, and the nun’s nephew Jonah, a blind boy who went missing when his aunt was abducted. Mallory believes that the pair became involved by mistake, and what she discovers about their background strikes a chord with her own unhappy beginnings. Using her preternatural instincts and ability to compel witnesses, she makes progress, even as her colleagues come to believe that Jonah is probably already dead.

Mallory is a unique and fascinating character, with insight into behaviour which makes her a formidable sleuth. Skilled in detecting lies, she enlists the help of psychologist Charles Butler to better evaluate key witnesses. Awesome hacking skills and single-minded pursuit of her objectives bring Larsson’s Lizbeth Salander to mind, but while Salander operates in the shadows, Mallory overtly imposes her will on everyone with whom she comes into contact, including her boss, the overmatched Lieutenant Coffey.

The nature of Mallory’s psyche in fact makes every relationship a battle of wills. Even with her allies: her partner Riker, the ME, or Butler, Mallory brings an intense focus onto any perceived shortcomings, and what is owed to her personally for any failings. Her insight leaves the less intuitive trailing in her wake.

The unravelling of the crime is complicated from the start by the political overtones, but Mallory’s nose for the false puts her immediately on the right track. On arrival at Gracie Mansion, subtle interchanges between the mayor, the police chief and a senior cleric alert her to the fact that the abduction of the nun had been reported earlier than stated, but for some reason the chief is concealing the fact.

The nun, once the prostitute Angie, turns out to be of pivotal importance to the case. Her background has many points of contact with Mallory’s ‘felony childhood’, which underpins the detective’s motivation. The full story of Mallory’s history is explained in previous books, but enough is said here to intrigue a reader new to the series. Blind Sight boasts a great character, and is a book full of subtlety, tension and excitement.