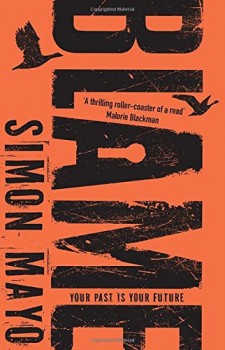 Sixteen-year-old Ant and her younger brother Mattie have been sent to prison for crimes they didn’t commit, but under a new law, they can be held responsible for the sins of their parents and even their grandparents.

In a hard-line, conservative – with a small c or a capital one, you pays your money, you takes your choice – Britain, society now demands that the families of criminals pay their dues, too. Those who have lived in luxury off the backs of victims can expect to be tracked down and committed to prison, and this applies to any children, as well. If your parents or your grandparents are found to have committed a crime, you’re in the firing line as well. It’s called heritage crime, and it would no doubt go down very well with Daily Vile readers if it was brought it in now.

As a result, prisons are a huge growth area. HMP London has been formed from the amalgamation of Holloway and Pentonville, with a new family unit nicknamed Spike. Here, Strutters – named for the upright posture forced on them by brutal electronic tag-belts encircling their waists – live and work with their families. Some, like Ant’s foster father Dan, are allowed out of the prison to work in the community, because so many have been sent to jail that labour shortages have been created, but their earnings are taken by the state.

Sixteen-year-old Ant and her younger brother Mattie are in foster care because their parents scarpered before the police could catch them. The youngsters then fall foul of the heritage crime statutes when the criminal past of their foster parents’ own parents catches up with them. Only Dan and Gina’s eldest son, Max, is able to escape the state’s retribution as he’s now 18, but if they commit any further crimes, Max will suffer, too.

The regime in HMP London is brutal, and Strutters are seen as the lowest of the low. Tensions are simmering not far beneath the surface and it won’t take much for everything to kick off. When a full scale riot breaks out, it’s up to Ant to keep Mattie safe, but that’s not easy when she’s the one the rioters want to get their hands on.

Blame would be a chilling book to read at any time, but in post-Brexit Britain where xenophobia and intolerance are currently plumbing new depths and politicians are practically quoting from Mein Kampf, it doesn’t take much of a stretch of the imagination to jump to the dystopic country Simon Mayo depicts. Baying for blood seems to have become a national sport, and I’m sure the weekly ‘Correction’ sessions, where prisoners confess their ‘sins’ or those of their parents live on TV would go down an absolute storm in some quarters.

Blame’s main character Ant is tough, gutsy and rash, brimming with injustice and determined to shout aloud to the world that she’s not to blame. Her desire to protect Mattie inadvertently sparks off a chain reaction that threatens to engulf them all. The scenes inside the festering mess of hatred contained in HMP London are vivid and brutal, and it’s hard to believe than anyone will escape with their lives.

Both children and adults are well-depicted and the story fizzes along at the pace of an out-of-control firework. Children grow up quickly in enforced confinement and Mattie is every bit as strong a character as his older sister.

Radio presenter Simon Mayo’s YA debut is as horrifying as it is darkly gripping. I just hope it doesn’t prove in any way prophetic.