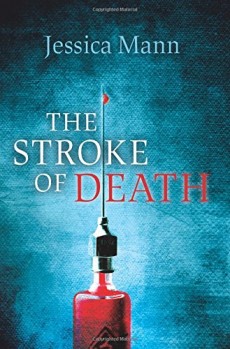 The Stroke of Death

Tamara Hoyland is left to deal with the aftermath of her father-in-law’s death, and the return of the black sheep of the family, her grasping brother-in-law.

This is my first encounter with prolific crime writer Jessica Mann. In The Stroke of Death, she brings back, after a gap of 25 years, her earlier series character, Tamara Hoyland. Tamara is a wife, mother and archaeologist. She’s also a former employee of a shadowy government agency known as Department E, but that part of her past is buried as deep as some of the archaeological items that Tamara occasionally unearths.

Her husband, Alastair, is a medical researcher who has eschewed patient contact in favour of trips to exotic locations, usually deep in the jungle, in search of medicinal plants. When Alastair’s father dies, it comes as a surprise, even though he was in hospital, as the staff had been under the impression that he was rallying. Although Tamara has a power of attorney from her husband, her attempts to deal with her father-in-law’s house and possessions is frustrated by the recent reappearance of Alastair’s brother, Euan, the black sheep of the family.

Euan has been working in America for a while, following an incident that left him forbidden to practice medicine in the UK, even though he wasn’t actually struck off the register. The grasping and infinitely dislikeable Euan promptly makes himself at home in his father’s house and starts claiming things as his own, despite being expressly cut out of his father’s will.

Her earlier career has left Tamara with something of a suspicious nature, and she isn’t terribly surprised when the police want to perform a post-mortem on her late father-in-law. She can’t help thinking, as do others, that his death, just after the return of a son who has had plenty of experience in giving death a helping hand, is perhaps just too much of a coincidence.

The Stroke of Death takes a dark, and at times uncomfortable look at the subject of assisted dying. One of Tamara’s friends has terminal cancer and is busily researching ways of ending her own life; Gloria, a nurse, has little compunction in ending the lives of those who can’t help themselves, and there’s a doctor in an elderly persons’ home who takes the same approach.

This isn’t a subject on which I'm squeamish and personal experience has turned me into a passionate advocate for the right of a person to choose the time and manner of their own death. But Mann highlights the problematic nature of the subject, choosing to concentrate on cases that are at best borderline and, at worst, murder. The way the unpleasant Gloria torments Davy is particularly unpleasant. He’s a paralysed rugby player who has been unable to communicate to his family and carers the fact that inside an unresponsive body, his mind is still active and aware.

The structure of the book is somewhat problematic in that there are no chapter breaks, simply scene breaks in one long and occasionally disjointed narrative. The story is mostly told in the third person, but shifts into the first person when dealing with sadistic nurse Gloria. I liked Tamara Hoyland as a character, and it was interesting to see the gradual shift in her thinking from staid wife and mother to a woman keen to move back into the sort of life she used to lead.

Mann successfully challenges perceptions around the nature of death and the morality of taking a life and provides a timely reminder that not everyone’s motivations are the same on this subject. She hasn’t changed my views, and I doubt that was her intention, but she does present a very good case for any system dealing with end of life care must have adequate safeguards in place. This is a book that will make you think about a difficult subject.