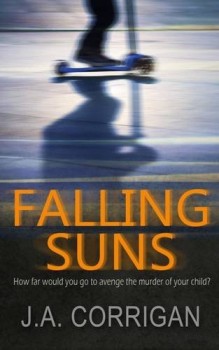 Rachel has given up her job as detective inspector to raise her son. Her son is murdered and Rachel’s cousin is convicted for his murder and placed in a secure psychiatric unit. When it becomes clear that he is likely to be freed, Rachel is driven into a determined and elaborate plan for revenge.

Rachel Dune had a son, Joe who she loved fiercely. An ex-DI, she had given up her job to raise her son. Her marriage to her artist husband is shaky and she is convinced that he has been having an affair. One day, Joe goes missing and is eventually found murdered and mutilated. Rachel’s strange cousin Michael is found guilty and is sent to a secure psychiatric unit.

Rachel’s close friend, Jonathan, is a journalist, particularly talented at investigation. Rachel’s ex-boss is her staunch ally and supporter. Both are very worried about the impact that the news of Michael’s imminent release, following reassessment, will have on Rachel. When she disappears for a long holiday Jonathan is driven to find her before she does something she may regret.

It is also clear that Rachel has a very cold, and unusually cruel mother, a father who has tried to protect her while also supporting his wife and a dysfunctional aunt and uncle, parents of the convicted cousin.

JA Corrigan handles the plot with intricate care. The reader is made aware of the relationships between the characters and the series of disturbing events which happened in the past by allusion, then circumstance and finally by disclosure of detail in a way that leads you to constantly re-evaluate the likelihood of actions and causes in a very satisfying manner. Particularly chilling is the evocation of Rachel’s mother, the way she brought up her daughter and the increasing awareness of her relationship with the convicted murderer.

Michael’s power of control, his sexuality, his relationship with Rachel and her relationship with him are a strong strand throughout the narrative. You find yourself fascinated and horrified by his personality.

Corrigan also make effective use of slightly mystical, supernatural imagery. Although you do not believe that Rachel is actually seeing Joe, the evocation of the smell of toffee popcorn and the electric blue flashes make her mental state and grief very believable. Michael’s perception of coloured auras reflect his mental state but also seem highly believable and help you to have some empathy with him.

This book is highly effective. The pace is relentless and it is really is difficult to put it down. The plot and characters are believable, and the atmosphere created is redolent with both despair and hope. This is an excellent read.