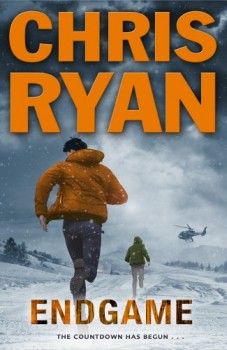 Teenage agent Zach Darke has to go up against an old adversary to save the life of two friends.

Zach Darke works for a shadowy government agency doing the sort of work that the average teenager can only dream about. But it’s not all glamour, fast cars and breath-taking escapes. It’s also hard, dirty and lonely, especially when Zach discovers that the two people who are closer to him than anyone have been kidnapped by ruthless drugs lord, Cruz Martinez, who has a very personal grudge against Zach and will stop at nothing to get his revenge.

Raf and Gabs taught Zach all he knows about survival, and he’s going to have to use all his skills to get them back alive. Alone, and in a very hostile situation, Zach has to decide who – if anyone – he can trust. His own agency believes he’s gone rogue, and his main handler has been killed. He turns to another teenage agent, Ricky, and together with the young genius hacker Malcolm, they set out to get Raf and Gabs back.

I haven’t read any of Chris Ryan’s previous Agent 21 books, but judging by Endgame, they’d be right up my street. In comparison to Andy McNab’s young adult series, they’re less violent and the language is certainly an awful lot less colourful, but they still pack a punch. Endgame comes over more on a level with Robert Muchamore’s CHERUB series, which I also enjoy. Ryan has a strong moral code at the heart of the book and, so far at least, neither Zach nor Ricky has crossed the final line in their jobs and killed someone, and they’re keen to keep it that way.

The action is fast moving and the dialogue is as sharp as a tack. These teenagers come over as real and likeable. There are no Alex Rider-style far-fetched escape sequences that, while entertaining, do tend to end up with disbelief hanging from a slender thread. Zach and his friends use their considerable wits rather than resorting to a spray of bullets, but despite that, there’s a very palpable sense of threat suffusing the story. People can and do die, and that isn’t sugar-coated.

It’s nice to find a book where the characters don’t just gallop past the final taboo – the taking of a human life – at speed on their way to the next fire-fight. I’m not saying that Zach will never cross that line, but the inherent uncertainty here is one of the book’s strengths. If Zach does kill, it will be for a damn good reason, not just because it’s the easy way out.