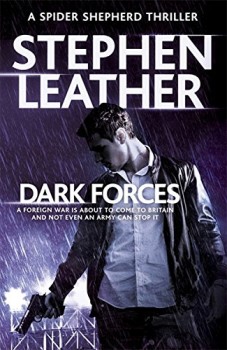 Spider Shepherd has to infiltrate a dangerous criminal organisation as well as help to counter attacks by IS terrorists.

Undercover operative Dan ‘Spider’ Shepherd is still working for M16 and still not getting on with his suave but distinctly annoying handler, Jeremy Willoughby-Brown, who’s pretty much the epitome of the sort of public school high-flier that Spider’s destined to have problems with.

The action starts with Spider in Syria, working with a team targeting so-called Islamic State with Hellfire missiles. They’re successful in taking out their target, but a highly-skilled IS sniper escapes. Cue Spider’s photographic memory. Even if you’ve not read any of the previous books this is a pretty big clue that the man will be Important Later.

A rapid switch then sees Spider in the depths of the New Forest, apparently about to carry out a gangland killing. Naturally, our hero hasn’t gone rogue, he’s just doing what he does best, infiltrating a criminal organisation run by two brothers – cue inevitable Piranha brothers comparison – Tommy and Marty, not Doug and Dinsdale. This pair are equally at home both nailing heads to coffee tables and using sarcasm, although the emphasis is more on the former than the latter. Spider is posing as a freelance heavy at the top end of the market and, as ever, he’s exceedingly good at what he does.

Woven in and out of Spider’s domestic operation is the separate strand of the infiltration of the UK by radical Islamists posing as refuges, a subject that’s bound to get any readers of the Daily Vile foaming at the mouth and yelling ‘I told you so!’ but no one can claim that Leather’s books aren’t topical, even though they do have a tendency to play to the peanut gallery when choosing their themes.

Despite being knee-deep in bad guys, Spider has to squeeze in some time for his home life. Son Liam has decided, in the words of Harry Chapin’s Cat’s in the Cradle, to ‘be like you, dad’ and is intending to join the army – not news that Spider greets with much enthusiasm. As well as that, Spider has to contend with his twice yearly psychological appraisal, and this time he doesn’t just get to go for the usual drink and the opportunity to discuss the plot with Caroline Stockmann, he now has to contend with a slick outfit brought in by Willoughby-Brown who subject him to the equivalent of inkblot tests.

I freely admit, I’m normally a fan of the macho but intelligent Spider Shepherd, but on this occasion I couldn’t rid myself of a nagging feeling that the Doug and Dinsdale plot was just there to provide the obligatory second string to the bow. Yes, it does all come together in the end, but the climax felt far too rushed, with both Spider and Murray, the laconic SAS captain riding shotgun for him, desperately underused. After all the build-up, the final action scenes needed to have been double, or even treble their length, to justify the amount of ink spilt in getting to that stage.

Despite that, Dark Forces is still a very serviceable, hard-edged thriller, with all the usual shades of grey that come from Spider having to get close to people before having to betray them. We also get to see a few developments for him on the personal front that hold the promise of making his already complex life just that little bit more difficult.