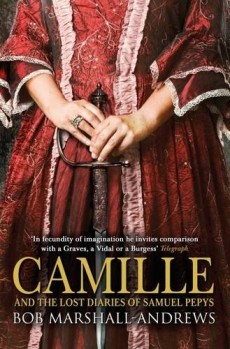 Camille and the Lost Diaries of Samuel Pepys

Bawdy Restoration England is threatened by a renewal of the war between King and Parliament. A chance meeting between the beautiful Camille, a fugitive French actress and Royal advisor Samuel Pepys leads to an improbable love story in an atmosphere of  political intrigue and danger.

A fine point of definition for criminal barrister and former Labour MP Bob Marshall-Andrews. Can boy and girl twins really be identical?  Whatever the answer, don’t let it distract you from this wonderful Restoration romp across two countries, full of 17th century political intrigue, danger, death, religion, revenge, bawdiness and a surprisingly tender literary love story.

Narrator Camille Lefebre is a strong lead, but shares the billing with Charles II’s secretary of the Navy Samuel Pepys, diarist, irascible rogue, schemer – and a man with a huge appetite for life. Camille, the daughter of a famous English actress, is brought up in the beautiful Perigord in south west France. She is totally bilingual and because of the physical and mental problems of her twin brother, a tragic almost Dickensian figure, trained and skilled in arts no well brought-up young lady should know!

Pursuing her own stage career, she is forced by a by-law banning women from the stage to appear as a male ‘female impersonator’ and adopts her brother’s name and clothing to become to the toast of the Paris theatre. She is forced to flee after killing a bullying young aristocrat in self defence and seeks her mother’s family in London, where a chance meeting with Pepys and his friend, the scatological poet and rakehell, John Wilmot, second earl of Rochester, takes all their lives on a different path.

England is at a crossroads. Charles may be king, but a powerful Parliamentary faction want him to take the same route to the execution block as his father. A second civil war threatens. The King charges Pepys with the negotiation of a secret treaty with the French which will strengthen his position and he and Camille, who has become the increasingly short-sighted civil servant’s secretary/companion are plunged into a world of secrets, plots and danger.

Their growing relationship, seen through Camille’s eyes, is the heart of this carefully constructed political thriller, full of a sense of time and place and with a nice balance of humour and sadness. Camille is never afraid to say what she thinks and there is plenty of well-paced, plausible and exciting action.

Bob Marshall-Andrews, who writes with fluency, great observation and wit, would have fitted perfectly into Pepys’ role – and given his own record, would have been quite at home in the politics and scandals of the time. Perhaps he shows a little too much sympathy for the ageing diarist and philanderer and possibly there is a little too much namedropping of famous historical figures, but taken all round this is a superbly written, rich and entertaining story.

Even the ending, which a harsh critic might suggest was weak, is really the only possible outcome. This is as good an adventure thriller, with its variety of relationships, backgrounds and motivations, as you’ll find – and a thoroughly convincing and enjoyable read.