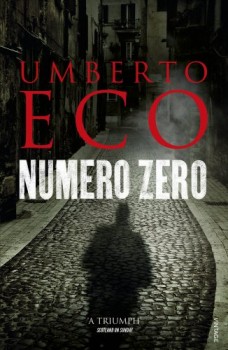 A journalist, convinced that the death of Mussolini was faked in a conspiracy linked to many subsequent Italian events, is found stabbed.

Writer Colunna is invited to join a Milan-based team of journalists recruited to develop a newspaper specialising in the future. Simei, the editor, explains privately that the paper is being financed by Vimercante, a magnate who has little interest in news but intends to use dummy copies as leverage to gain access to an inner sanctum of financial and political movers and shakers.

Six journalists are recruited from the odd corners of the press, and Simei makes it plain that he intends to adopt the most cynical of editorial policies. One of the staff, Braggadocio, spends his time researching his theory that Mussolini’s death in 1945 was that of a double, and that the man himself was given shelter in the Vatican. Braggadocio also links this to conspiracies from that time up to 1992, when the book is set.

Colunna finds Braggadocio’s theories far-fetched, but starts to wonder when events take a serious turn. Awaking one morning, Colunna finds that his water tap has been turned off, showing that someone has somehow gained access to his flat during the night when he was sleeping. Could he be in danger from someone determined to keep safe the secrets of the rich and powerful?

Many will be familiar with Eco’s first novel, The Name of the Rose, a masterpiece of medieval sleuthing, demonstrating a profound grasp of thought both ancient and modern. His subsequent works did not enjoy the same success, although the scope of his imagination and erudition was always evident. Plots and conspiracies are a common theme, normally in historical settings, but in Numero Zero brought into the modern era.

The book does not have the length or depth of Eco’s major works, and publication may be related to the author’s death this year. Certainly the themes are explicit. The references and jokes are primarily Italy-based, and some are obscure to a non-native, but much is clearly applicable worldwide.

The story about the newspaper provides the opportunity to vilify the press and explores in detail the methods used to exploit cynically every opportunity available to titillate, to exploit prejudice, and to slant the facts so as to push opinion in a direction favoured by the editor, or more likely, the owner.

The main plot links a few puzzles surrounding the death of Il Duce to CIA-inspired action in post-war Europe, the Mafia, Moro’s assassination, and so on, to create one gigantic conspiracy theory. I’m assuming that the story was first written in 1992, which would make the idea rather fresher than it appears now.

What might be best described as an exploration of societal ills may not appeal to a very wide audience. Given Eco’s facility with words and ideas, however, and his cynical and lively sense of humour, there is much here to enjoy.